Takeaway: Surya Namaskar is a morning practice of 12 yoga asanas that are further complemented with corresponding mantras.

Meaning “Sun Salutation,” Surya Namaskar is an important part of a well-rounded yoga practice. It’s a series of 12 yoga postures that gently warm up the spine, generate internal body heat and prepare the body for the bulk of the yoga practice: longer holds in yoga asanas.

Surya Namaskar is not part of the traditional group of yoga asanas mentioned in the ancient texts. Nonetheless, it’s considered a complete sadhana, or spiritual practice, as well as one of the best practices for maintaining physical health. Surya Namaskar includes asana, pranayama (breath work), mantra (chanting) and dhyana (meditation). Moving with the breath is an important part of Surya Namaskar, as is focusing one’s awareness on the physical body or even the chakras. Each movement in the classical Hatha version of Surya Namaskar has a corresponding mantra. These encourage reverence to the sun: the giver of life and symbol of the spiritual self.

At the physical level, Surya Namaskar strengthens, builds muscle, boosts metabolism and stimulates the respiratory, reproductive and circulatory systems. At the energetic level, it activates the body’s solar energy and generates prana, the vital life force. (Learn even more about why we Wake Up and Salute the Sun.)

There are three common variations of Surya Namaskar. The first is the classical Hatha Sun Salutation, described below. The second and third are Surya Namaskar A and B, which are practiced in Ashtanga and Vinyasa yoga styles. While each has their own benefits, the classical Hatha Sun Salutation flows between forward and backbends with each consecutive movement, focusing on spinal flexibility.

Stand near the top of the mat with the feet hip-distance wide. Exhale and bring the palms to touch in front of the chest.

Mantra: Om Mitraya Namaha - "Salutations to the Friend of all." 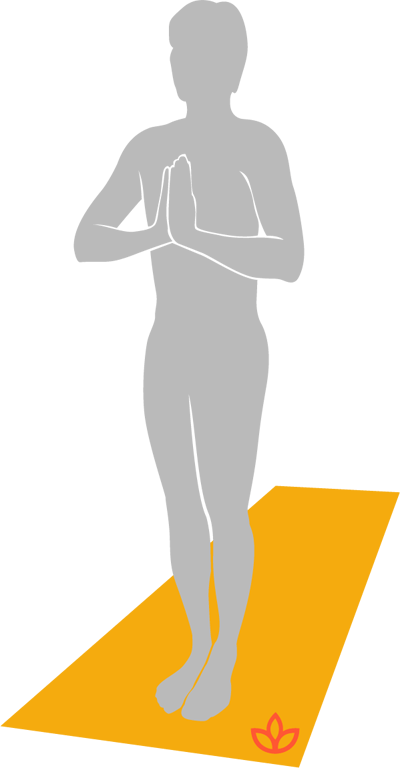 Inhale and reach the arms toward the sky, palms facing forward. Gently arch the back.

Mantra: Om Ravaye Namaha - "Salutations to the Shining One." 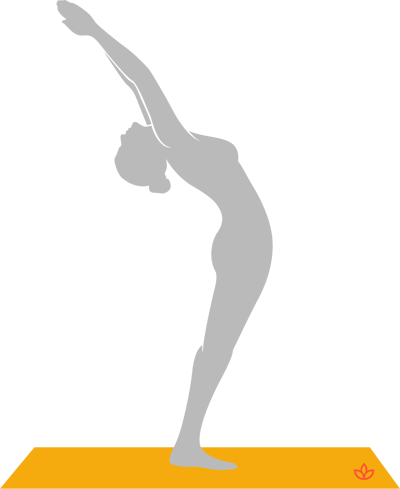 Exhale and bend forward, bringing the palms to the floor on either side of the feet. Bend the knees as needed.

Mantra: Om Suryaya Namaha - "Salutations to the One who induces activity." 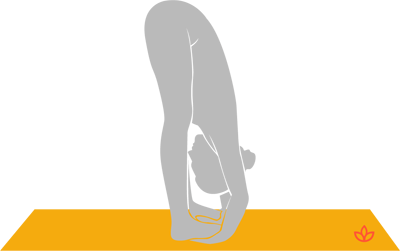 Inhale and step the right foot back and bring the knee to the floor. Make sure that the left knee doesn’t move beyond the left ankle. Bring the fingertips to the floor and lengthen the spine, gazing forward.

Mantra: Om Bhanave Namaha - "Salutations to He who illuminates." 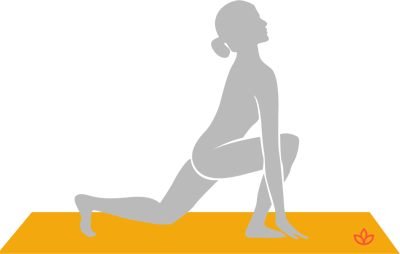 Hold the breath and step the left foot back so that the feet are hip-distance wide. Align the legs and torso in one diagonal line, arms straight, fingers spread wide.

Mantra: Om Khagaya Namaha - "Salutations to He who moves quickly through the sky."

Exhale and lower the knees, chest and chin or forehead to the floor. The hips should be lifted from the ground and elbows close to the body.

Mantra: Om Pushne Namaha - "Salutations to the Giver of Strength."

Inhale and slide forward and up, untucking the toes and arching the spine. Lengthen the arms, keeping the elbows bent slightly.

Tuck the toes. Push the hips up and back, lengthening the arms so that the body forms a triangle shape.

Mantra: Om Marichaye Namaha - "Salutations to the Lord of the Dawn."

Inhale and step the right foot forward between the hands. Lower the left knee to the floor. Make sure that the right knee doesn’t move beyond the right ankle. Bring the fingertips to the floor and lengthen the spine, gazing forward.

Mantra: Om Adityaya Namaha - "Salutations to the son of Aditi, the cosmic Mother."

Exhale and step the left foot forward so that the feet are hip-distance wide. Bow forward, drawing the nose toward the knees.

Mantra: Om Savitre Namaha - "Salutations to the Lord of Creation."

Inhale and rise to standing, reaching the arms forward and then up toward the sky, palms facing forward. Gently arch back.

Mantra: Om Arkaya Namaha - "Salutations to He who deserves praise."

Exhale and draw the palms together in front of the chest.

Mantra: Om Bhaskaraya Namaha - "Salutations to the One who leads to enlightenment."

While the classical Hatha Sun Salutation is made up of 12 postures, this is essentially only a half round. Complete a full round by stepping the left foot forward and back the next time around instead of the right.

Beginner yogis usually find that three rounds of Surya Namaskar are enough to get the body warm. With practice, this can be increased to six or 12 rounds for more seasoned yogis. Surya Namaskar should always be followed by a minute or two of resting in savasana. (Learn why it's Rejuvenating in Savasana.) Although Sun Salutations increase the heart and breath rate, they’re not meant to wear the body out. A short rest helps to bring the yogi back to a rested state before practicing other asanas.

Surya Namaskar brings flexibility, strength, focus and a vitalizing affect on the body, mind and spirit. It’s the perfect flow for warming up the body and spine, and should be a part of every yogi’s practice. (Continue reading in 8 Benefits of Daily Surya Namaskar.)

Julie Bernier helps women find wellness from the inside out. She lives and teaches the ancient sciences of Ayurveda and yoga, combining the two to help clients naturally restore their inner balance for lasting well-being. Julie has journeyed to India many times over to study this wellness wisdom at its source.

Discover the Best Time of Day for Your Yoga Practice
What Makes a Mantra?
Salute the Sun's Life-Giving Glory With This Surya Namaskara Series
How to Live More Consciously With This 4-Part Morning Routine
Wake Up and Salute the Sun
Morning Rituals for Yogis