Takeaway: Using nature and all our senses as a means of tapping into the beauty of our innate connection with one another and the planet, Bill’s yin yoga classes are like no other I’ve ever experienced.

I met a yin yoga teacher on February 12th, (my birthday.) I sat down next to him in the afternoon, at my favorite neighborhood coffee shop. I’d seen him walking and biking the neighborhood trolley trail before, often passing him on the trail, even in seven-degree weather in the heart of a cold Midwestern winter.

As we exchanged pleasantries in the cafe that wet, cold afternoon, I learned we had much in common. Like me, Bill had been living a car-free lifestyle for the past decade—not an easy feat in the breadbasket of America. We talked non-stop for over an hour and exchanged our contact information.

Fast forward a couple weeks and he’s inviting me to his yin yoga classes in Kansas City’s beautiful Loose Park. This environmentally-minded man wooed me with his Nature Yoga classes, in which he taught a simple yin sequence he’d developed himself. This is how he describes it:

Yin, like all other forms of yoga can be made unnecessarily complicated. As a 56-year old man, with multiple sports injuries, and being an ultra endurance athlete, I wanted to have a simple sequence that would work for me, and people of all ages. I have clients in their teens, and clients in their late 70’s and early 80’s. I found that a simple core warmup, followed by just four or five main poses was sufficient.

In a nutshell, Bill’s yin yoga sequence looks like this: 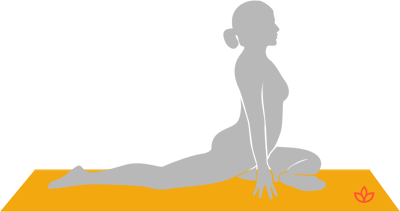 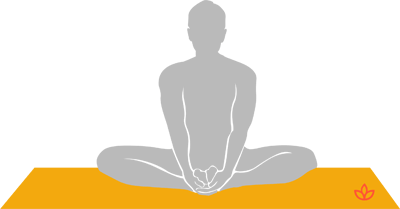 After all, this was how the ancient yogis did it, I thought to myself in wonderment as a blanket of calm washed over me while Bill’s soothing voice invited us into deep states of relaxation.

As we held the yin postures, he guided us into mindfulness practices, deep breathing exercises, and even used his storytelling skills to weave anecdotes throughout class.

Read: Grounding Through the Senses: Mindfulness Techniques to Help You get Grounded

Ground Yourself on the Earth

One reason I think Bill’s classes have such a profound effect has to do with the grounding nature of practicing yin on the earth. Most of the poses take place on the ground, and students can use a mat, a blanket, or nothing at all.

Getting close to the earth, touching it, feeling it, and resting the body on it is deeply calming. It’s a powerful reset, as Bill calls it, and one that’s believed to help balance the root chakra. Yin gets infinitely better when practicing it on the earth.

Read: Getting Grounded: What It Means and How to Get It

Mindfulness of the Sensorial Experience in Nature

Practicing a mindfulness technique, like that of moving your awareness from one sense to the next, is a powerful way to connect oneself to the present moment.

Doing the same while being outside in nature is a powerful way to connect oneself to the rhythms of the Universe. This is something you just can’t experience within the indoor confines of a yoga studio.

Read: Deepen Your Connection to the Five Natural Elements With These

Experiencing the Laws of Gravity Within the Pose

During yoga class with Bill, he often talks about how doing the poses on the raw earth allows us to surrender to the laws of gravity. Here’s how he puts it:

Gravity also helps with hip openers such as butterfly pose. Gravity helps us twist more deeply into a supine spinal twist. It’s not only you and your body opening up, it’s the natural laws of gravity that help you open up even more—which is in my opinion—extraordinary.

Connecting to Each Other While Immersing Ourselves in Nature

Nature is innately humbling. There’s no such thing as a division between age, skin color, or social or financial class. This fact is realized experientially while practicing a very down-to-earth yin yoga class. We realize how small we are in the grand scheme of things, while holding each pose and breathing deeply.

When we do it together, we understand how at the most primordial level, we’re all the same. I’ve no doubt that if we all experienced this together, on a regular basis, peace would be within grasp.

Read: Get Grounded This Earth Day and Try 'Earthing'

Oxygenating our bodies with fresh air is one of the healthiest things we can do for ourselves. Bill encourages his students to breathe audibly, to hear their breath, and even exaggerate it. When I follow his lead, I naturally elongate both my inhalations and exhalations. Doing this outside has a more profound effect than doing the same in a yoga studio or home.

Using nature and all our senses as a means of tapping into the beauty of our innate connection with one another and the planet, Bill’s yin yoga classes are like no other I’ve ever experienced.

To connect with this Kansas City based yin yoga teacher, and read more about his yoga classes, bikepacking classes, and outdoor wilderness school, check out his website here: https://yinyogakc.blogspot.com

Get Grounded This Earth Day and Try 'Earthing'
Grounding Through the Senses: Mindfulness Techniques to Help You get Grounded
Wisdom of the Elements: Learn the Qualities of Life Through Mother Nature
Accompany the Divine Play of Nature and Connect With Nurturing Mother Earth
Ground Into Tadasana to Connect With Your Root Chakra
Getting Grounded: What It Means and How to Get It