Takeaway: Incorporating the Ashtanga Primary Series into your routine will deepen your yoga practice in many ways.

Ashtanga vinyasa is a carefully crafted and methodical sequence of postures that builds progressively in intensity. If you have ever wondered if there is a logic behind the progression of asana in the Ashtanga Primary Series, you are not alone. They are several key poses in the Ashtanga Primary Series that help you progress to the next posture and ultimately, the Intermediate Series.

If you look at the sequence as a whole, Ashtanga vinyasa is broken down into the categories of:

Two of the poses we will look at come from the Standing Poses and Finishing Sequence, while the other two come from the Primary Series itself. The key postures of the Ashtanga Primary Series are Utthita Hasta Padangustasana (Extended Hand to Big Toe Pose), Marichyasana D (Marichi's Pose D or Sage Twist D), Supta Kurmasana (Sleeping Tortoise Pose), and Urdhva Dhanurasana (Upward Bow, also known as Wheel Pose).

The Importance of the Sequence

The Primary Series is known as Yoga Chikitsa, which translates to "yoga therapy" from Sanskrit. It is the sequence that helps the physical body and rids the body of disease. Following in line with much of yogic philosophy, the way in also begins with dealing with the external form first. You must understand your physical body first.

Many diseases in contemporary life are derived from the diet. Therefore, the postures in the primary series emphasize forward folds in order to compress the digestive organs and stretch the back of the spine.

Additionally, the primary series has an emphasis on the alignment of the primary curve of the spine, the thoracic spine. This is performed by keeping the rib cage tucked in while performing the various forward folding postures during the sequence. This is opposed to the stronger emphasis on the secondary curves of the cervical and lumbar in the intermediate series. It only makes sense to emphasize correct alignment of the primary curve first, since this is the first developed part of the spine we are born with. 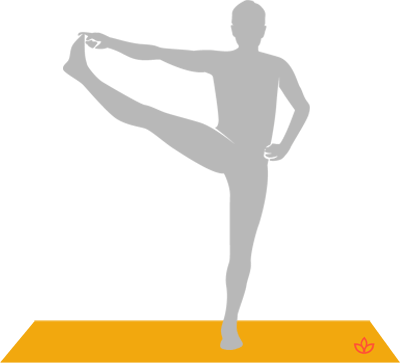 Standing postures are performed after surya namaskar) in order to stretch the legs. Utthita hasta padangustasana is a great example of this as a challenging balance posture. The sequence calls for 15 breaths throughout the duration of this short sequence, not including any transitions.

To perform the pose:

It is a pivotal pose, and rightly so. First, one must be able to hold the balance for an extended period of time. This displays not only the strength of the body but also the mind. With the leg completely extended, adequate hamstring flexibility is achieved.

It is also important to maintain and engage the bandhas, drishti, and ujjayi breath during this sequence, otherwise, all the benefits will be lost. 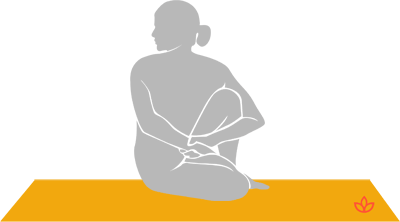 Things start to get a little more complex with Marichyasana D, the culmination of a series of binds and twisting postures. The seated postures of the primary series focus on the spine. Marichyasana D is a very deep twist with one leg in ardha padmasana(half-lotus pose) and the other is internally rotated in a half-squat position. You then twist in toward the leg in the half-squat and bind your arms around the leg.

To perform the pose:

This pose can be quite complicated and is best to ease into it under the guidance of an experienced teacher. Those with knee injuries may need to take caution or modify completely. However, it is important to master this posture if you wish to proceed into the second series. The reason for this is because the second series begins with pasasana, a crouched position where you twist and bind around both legs.

Marichyasana D prepares you for the more difficult pasasana by bringing one leg into half-lotus. What this does is create a sort of blockage that you must work your way around, (or twist around rather) because when you move onto the second series, the space to twist will be even greater.

Twisting is obviously an important component of Ashtanga vinyasa in general and it’s said that twisting to the right stimulates the descending colon of elimination. Additionally, with the feet in the half-lotus position, their positioning stimulates the liver and spleen respectively for an additional cleansing effect.

Read: Why We Twist in Yoga: The Benefits of This Simple Action

For some, this posture may take many years to master. Supta Kurmasana is performed by folding forward with the legs over the head and the hands bound behind the back. This is the pinnacle of the primary series in which the hip opening and twisting of the previous postures in sequential order have prepared the body.

To perform this pose:

This pose is important because it is most practitioner’s introduction to leg-behind-the-head poses. During second series, there are three such poses that are progressively more challenging. Being able to maneuver into supta kurmasana, with or without the help of your teacher, is a good indication that the hips and spine are ready for the intermediate series. 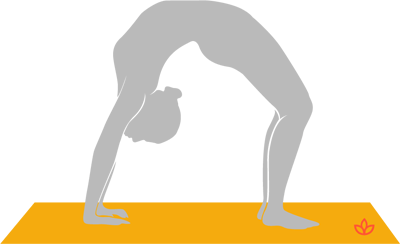 Finally, we get to the backbending to finish the Ashtanga sequence. Backbending is essential at the end, no matter what sequence you perform. Even though the majority of primary series is forward folds, the final pose is setu bandhasana (bridge pose), which prepares the body for backbending and gives a tease of what to come in second series.

To perform this pose:

Backbending is unique in that it is both extension of the spine combined with an inversion at the same time. It activates the primary curve in the opposite direction, so it helps to balance all of the forward bends. It is important to master urdhva dhanurasana in order to know how to engage the back muscles properly and avoid injuries.

In the beginning, most people will practice wheel pose from the ground. However, eventually, you can begin to practice what’s called “dropbacks”, where you go from standing to wheel pose and then back up. This is another stepping stone in order to know one is ready for the more advanced backbending in the second series, such as laghu vajrasana and kapotasana.

Tying It All Together

The way the Ashtanga sequence works is that each pose and also the section of postures need to be mastered before moving onto the next. This allows the next pose to be more easeful rather than so challenging. Without meeting necessary requirements, you may find yourself up against a wall in your practice, which can present frustration when trying to progress in your practice.

Even regular Ashtanga practitioners are advised to go back to the basics of the primary series when something more advanced is not coming. Sometimes it may seem like a step backward, but it will only help you move forward in the end.

Sri K. Pattabhi Jois: The Bestower of Ashtanga Yoga to the West
Salute the Sun's Life-Giving Glory With This Surya Namaskara Series
Moving Beyond Failure: A Lesson From Ashtanga Yoga
Surya Namaskar: 12 Morning Asanas & Mantras
8 Benefits of Daily Surya Namaskara
A Journey Through The 8 Limbs of Yoga