Ong namo guru dev namo (Sanskrit: ॐ नमो गुरु देव् नमो) is an important mantra used often in Kundalini yoga. This mantra means “I bow, or salutations to the divine teacher.” It can also be viewed as meaning, " bow to the teacher within." It is also sometimes called the Adi mantra.

This mantra is usually chanted three times at the beginning of a Kundalini yoga practice or class. Ong namo guru dev namo is considered a high vibration, protective mantra as it is believed to help the yogi to connect with the power and insights of the community of Kundalini yoga students and teachers as a whole. This connection with wider power is referred to by the Kundalini community as the "golden chain." 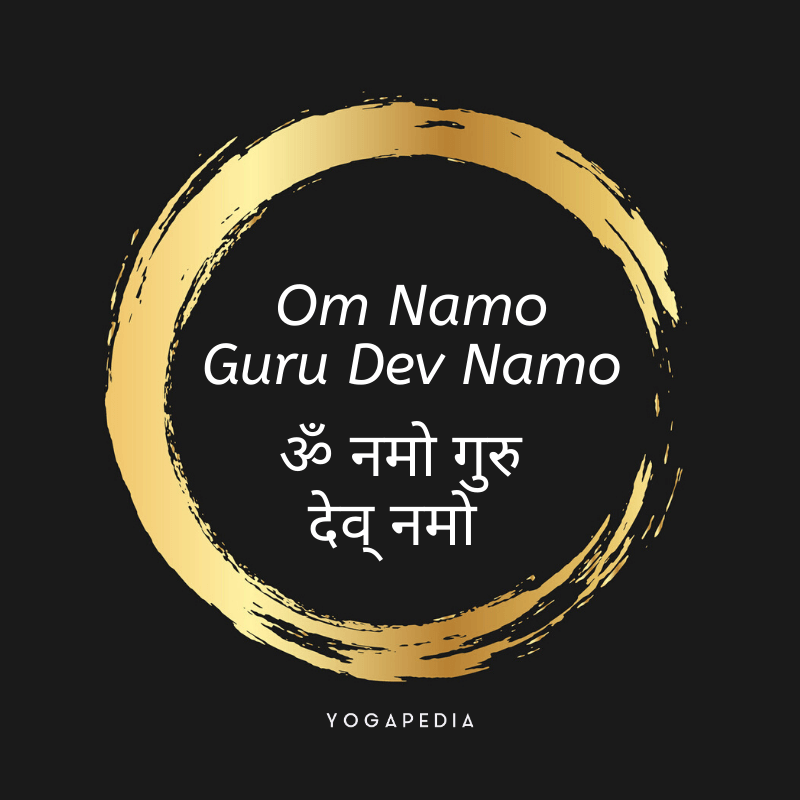 Ong is another way of saying the popular “om,” which is thought to constitute the Divine in the form of sound. Ong has the advantage of moving the sound in the mouth from the front all the way to the back. This vibrates and stimulates various points on the roof of the mouth, which in turn stimulates different parts of the brain, specifically the pituitary gland.

Namo is actually the word, namaha, which specifically means “my salutations.” The “aha” in that word can change to an “o” in a Sanskrit linguistic a process called sandhi. This usually happens when certain letters are together, or to create the correct number of syllables for the flow of the mantra.

Guru is a specific teacher that acts as a spiritual leader for a disciple. Usually the devotees follow the instructions and practices laid out by the teacher in an attempt to achieve heightened spiritual growth or enlightenment.

Dev is a shortened way to say Deva. This shortened version of the word is usually found and influenced by the Hindi language. In Sanskrit and Hindi, Deva means, a god, the divine or an angel. In this sentence, it is the adjective for the previous word, guru. It describes the teacher as divine and exalted.

Ong namo guru dev namo honors both the inner wisdom of the yogi and the power of their community. A teacher may use it at the beginning of class in order to connect with their own teachers and the guidance of the community, thus allowing that power to teach through them. They are, therefore, drawing on the whole history and lineage of those who have come before them.

This mantra is said to refine the energy of the yogi chanting it as well as the energy around them. Some say it allows for a tuning in to a particular frequency of vibration in which the deepest understanding of Kundalini yoga can be accessed. This enhances the effect of the yoga practice. Ong namo guru dev namo can also be used by an individual yoga student to remind him/herself that they are their own greatest teacher.

Listening to Your Inner Voice
The Guru Guide: What to Watch Out for When Seeking Your Spiritual Master
The 5 Virtues of a Good Yoga Teacher
Seeking Your Guru: A History of Gurus in the West + 6 Bits of Advice for the Seeker
The Guru's Grace
The Main Message of the Gurus