Takeaway: Om Mani Padme Hum is a well-loved Buddhist mantra commonly translated as, "The jewel is in the lotus."

There’s a good reason why the Om Mani Padme Hum mantra is at the heart of many Buddhist traditions.

It is because every one of the Buddha’s teachings is believed to reside within this one powerful mantra. It is repeated over and over again to invoke the loving and unconditional qualities of compassion.

Whether said out loud or silently to oneself, this is one mantra you’ll want to practice to connect with your innately loving and compassionate nature.

Using a Mani with the Mantra

Modern seekers like to buy rings with the mantra engraved on them because it is said that even the simple act of gazing upon the mantra will bring about the same benevolent effects. Prayer wheels of various sizes, also called mani, are used for the meditation of Om Mani Padme Hum as well.

Buddhist practitioners spin these large prayer wheels or small hand wheels while meditating upon or chanting the mantra, simultaneously receiving its many blessings.

Tibetan Buddhists believe that each time a prayer wheel makes a complete rotation, it is equivalent to the merit gained from completing a year-long retreat.

To really know our intentions and motivations behind any mantra practice we must know exactly what the mantra means.

This makes our practice more meaningful and personal.

Many people refer to this mantra simply as the Mani mantra as it’s the most beloved and widely used among followers of the Buddha. (Learn more in 5 Powerful Mantras and Their Sacred Meanings.) 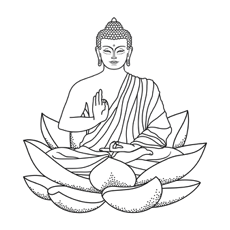 According to the Dalai Lama, Om Mani Padme Hum has the power to:

Tibetan culture tells us that to deeply know this phrase — to bring it into the very depths of one’s being — is to attain enlightenment.

Now, that’s saying a lot! If this is the case, we’ll all want to practice this mantra with great discipline and devotion.

Breaking Down the Mantra

Translating Sanskrit into English is challenging as there are many levels of meaning within the language. Below is a basic understanding of the mantra agreed upon by the majority of Buddhist practitioners.

The sound, Om, is believed to be the primordial sound of all creation.

The universe was created with Om and it holds within it all that is, was and ever will be.

Om helps us dissolve our ego and cultivate kindness and generosity whenever we recite it. (Learn more in 5 Benefits of Chanting OM.)

The ma syllable in mani is associated with dissolving jealousy and the attachment to fleeting pleasures. 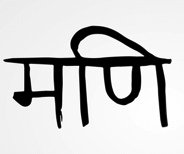 It lives within the samsaric realm of the jealous gods and reciting ma over and over helps us loosen our jealous attachments while cultivating ethical behavior. (Learn more in The Freedom in Letting Go.)

The ni syllable in particular is believed to dissolve our attachments to desire and passion while cultivating our ability to be patient with ourselves and others. It resides within the samsaric realm of the human being. The entire word, mani, means "jewel."

Pad is a syllable that dissolves our attachments to the many prejudices and judgmental notions we have while cultivating the quality of perseverance. 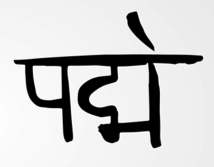 It lives within the samsaric realm of the animals.

This me syllable helps dissolve our attachments to being possessive while also cultivating our powers of concentration. (Learn more in Practicing Aparigraha (Non-Attachment).)

It resides within the samsaric realm of the hungry ghost.

With the syllable, hum, we work to dissolve our attachments to aggression and hatred.

We instead cultivate our own innate wisdom.

Hum is said to lie within the samsaric realm of hell. Hum also indicates that which cannot be disturbed by anything.

It is unshakeable and unmoveable.

The Jewel Is in the Lotus

As you can see, this is a powerful mantra with a lot of meaning behind it. The one phrase that is said to sum it all up is this: “The jewel is in the lotus,” or “Praise to the jewel in the lotus.” 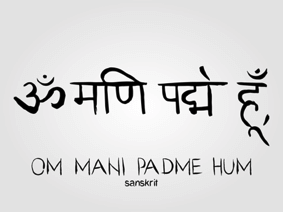 This is to say that within all of us is the lotus flower, it’s just covered up by a lot of mud and muck.

Reciting this mantra over and over again, with the right intention, is believed to get rid of the mud and muck until we are as sparkling, pure, compassionate and wise as the lotus flower itself.

According to a lecture given by the Dalai Lama, while it’s a good idea to recite this mantra over and over again, one must simultaneously meditate upon the meaning of each syllable.

In other words, we have to practice with the appropriate intention and understanding of the mantra. (Learn more in Svadhyaya: Spend a Lifetime Getting to Know Yourself & Deepening Your Yoga Practice.)

5 Benefits of Chanting OM
What Makes a Mantra?
The Makings of a Japa Mantra and How to Add This Yogic Practice to Your Sadhana
Meditating With Mala Beads
Advancing With Mantras
Music and Mantra