The Chakras and Maslow's Hierarchy of Needs

Takeaway: The yogic system of chakras reflects the same energetic and psychological development as Maslow's Hierarchy of Needs.

There are some very intriguing similarities between the yogic chakra system and Maslow’s Hierarchy of Needs. The chakras, which can best be defined as energy centers within our subtle bodies, are found within the body, along the central channel or spinal column. T his central column is called the shushumna nadi.

The chakras can be understood as vortexes of energy that also act as clearing houses. We create energy in them, we process energy in them, and we also process information that’s coming into our consciousness. We can transform and transmute the energy within our chakras to become more balanced and whole human beings.

The chakra system maps how the body and mind unite. It also maps how our emotions live within our body. Interestingly, the chakras are directly linked to our endocrine system, as each chakra is placed where a major gland of the endocrine system resides within the body. Therefore, balancing our chakras through our yoga practice also helps us balance the hormones of our endocrine system.

Here’s where the chakra system is related to Maslow’s Hierarchy of Needs: It is a psychological system that ultimately leads to self-actualization, and when all seven chakras are balanced, they ultimately do the same. Abraham Maslow came up with this hierarchy as a pyramid, which has at its foundation physiological needs, then safety needs, followed by love and belonging needs, then esteem needs and, finally, self-actualization at the top of the pyramid. It is a theory that maps human motivation and self-development.

The chakra system is similar to Maslow’s Hierarchy of Needs in that it, too, is a theory of developmental psychology. As we move from the root chakra, which defines the more rudimentary and base aspects of who we are, up to the crown chakra, which is infinitely more subtle and can be compared to self-actualization in Maslow’s pyramid, we are tracking human growth and development. (Learn more in What Can the Chakras Tell Us?)

Tools for Healing and Evolving

In the typical cycle of a human life, we move through various phases of self-development and motivation. Psychologically speaking, we all go through various rites of passage as we age. We develop different kinds of physical, emotional, mental and spiritual skill sets as we go.

When we experience severe traumas at particular stages of development, our chakras might experience an excess or lack of development. The root chakra holds the grossest frequency, while the crown chakra holds the highest frequency. Then every chakra in between moves along the scale from gross to subtle. Interestingly enough, each stage on Maslow’s pyramid also moves from base to more refined aspects of psychological development. (Learn more about Higher Consciousness Through Vibration and Meditation.)

In the chakra system, the three lower chakras connect us to our outer world. After the first, the root chakra, the second chakra is the spleen chakra, which is related to the sexual organs and sexuality; then the third chakra, or the solar plexus chakra, is our power center. These three foundational chakras are related to everything external, career, money, relationships, family, sexuality, power, physical body, etc. This chakra trio corresponds to Maslow’s physiological needs and safety needs. 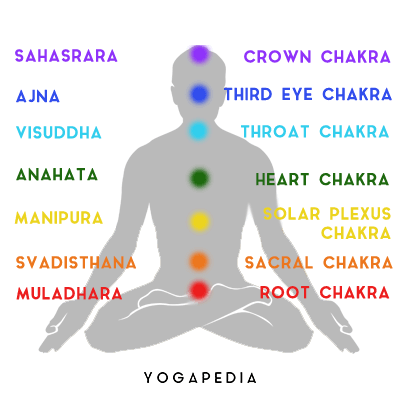 Next, we have the heart chakra, which bridges the lower chakras with the higher chakras. Energetically, it’s the center of the body and mind. We might say that it corresponds to Maslow’s needs of love and belonging. The three higher chakras are the throat chakra, which has to do with communication and speaking our truth. Next, there’s the third eye of intuition, and then our spiritual nature, which lies at our crown chakra. When we move upward into the higher chakras, we can see how they correspond to Maslow’s top portion of the pyramid, the one titled self-actualization. (Read more about the throat chakra in Lion's Breath.)

We do yoga to balance our chakras because, depending on how we were raised, what we inherited genetically and what traumas we might have sustained, our chakras might be deficient or excessive in nature. Because all the chakras work together, if one is deficient, another might begin to work overtime and end up overcompensating for the deficient one.

The chakra system becomes more fascinating the more you delve into it. There are yoga classes and asanas that focus on balancing each chakra. This can be incredibly beneficial to heal and sustain vibrant health. We all have areas of our life that need healing and the chakras are an intelligent means of achieving health on all levels: mind, body and spirit. It’s amazing how intelligent the physical aspect of yoga is, especially when we consider the poses aimed at balancing the chakras and thereby balancing the psychological aspects of our individual makeup. (Read more about Why We Practice Asanas.)

If you have an interest in psychology, then you’ll want to study up a bit on Maslow’s Hierarchy of Needs, as well as each particular chakra. Bridging yoga and psychology can take your practice to another level. You’ll be forever growing and evolving as you work with your chakras to restore and sustain ultimate well-being.