Hinduism's Lord Vishnu: Preserver and Sustainer of the Universe

Takeaway: Learning the peace and love that radiates from the teachings and incarnations of Lord Vishnu inspires us to practice loving-kindness and peace as we walk about this world.

“May good thoughts come to us from all sides.” -Hindu prayer

For Hindus, there is a single, universal god known as the Supreme Being, or Brahman. Brahman contains in itself both being and non-being, and is the sole reality — the ultimate cause, foundation, source and goal of all existence. Brahman is the creator, preserver, transformer and reabsorber of everything.

Numerous gods and goddesses — known as deva (masculine) and devi (feminine), meaning "heavenly," "divine" and "anything of excellence" — represent one or more of Brahman's aspects. Among the many Hindu gods and goddesses are the Holy Triad (Trimurti) of Brahma (the creator), Vishnu (the sustainer) and Shiva (the destroyer) of worlds. This article is dedicated to Lord Vishnu.

"Between Brahma and Shiva is Vishnu, full of guile and smiles. Unlike Brahma, he is not attached to the organization. Unlike Shiva, he is not disengaged from it. Like Brahma, he creates. Like Shiva, he also destroys. Thus he creates balance, harmony. A mixture of heart and head, engaged but not attached, constantly aware of the big picture." ~Devdutt Pattanaik, mythologist

The peace-loving preserver and sustainer of life, Vishnu represents the principles of order, righteousness and truth. Vishnu is not a literal person but the aspect of AUM (OM) that preserves the functioning of the universe.

Hindu faithfuls who pray to Vishnu are called Vaishnavas. For some, the goal of religious devotion (bhakti) to Vishnu is liberation (moksha) from the cycle of birth and death (samsara). For others, it is health and prosperity in this life, good crops, success in business or thriving children. Most Vaishnavas hope to spend eternity in Vishnu’s presence after death.

(More on the practice of devotion in Bhakti Yoga: How the Path of Devotion Connects Us in a Disconnected Modern World.)

Vaishnavas believe that in times of disorder, Vishnu will emerge from his transcendence to restore peace and order on Earth. He is often said to have more than 10 avatars, or incarnations. Despite the difference in form, or time, all of his incarnations had one common goal: to end all evil and to re-establish dharma (law of the universe), the path to salvation. It is for this reason that Lord Vishnu is known as the protector and preserver of the universe.

The Ten Avatars of Vishnu

In his most common form, Vishnu is portrayed as having a dark complexion (blue) — the color of passive and formless ether — and with four hands. However, each incarnation has a different form and purpose. Vishnu’s ten avatars include Matsya (fish), Koorma (tortoise), Varaaha (boar), Narasimha (the man-lion), Vamana (the dwarf), Parasurama (the angry man), Rama (the perfect human of the "Ramayana"), Balarama (Krishna's brother), Krishna (the divine diplomat and statesman) and the yet-to-appear 10th incarnation called the Kalki avatar. Some sources also consider Buddha as one of the avatars of Vishnu.

When men are faced with a challenge, a particular avatar descends to address the issue. The avatars are not random, arriving at specific periods of time when needed the most. Of them all, the two most widely recognized avatars is that of Rama and Krishna.

Rama is the god of truth and virtue. He is considered the perfect embodiment of humankind: mentally, spiritually and physically. Unlike other Hindu gods and goddesses, Rama is widely believed to be an actual historical figure whose exploits form the great Hindu epic, "Ramayana." Hindu faithfuls celebrate him during Diwali, the festival of light.

(More on this celebration in Happy Diwali! Illumine More Than Just Jack-O'-Lanterns This October for India's Festival of Lights.)

Krishna — one of the most beloved of Hindu gods — is the deity of love and compassion. He is frequently depicted with a flute, which he uses for its seductive powers. Krishna is the central character in the Hindu scripture, the Bhagavad Gita.

The Four Hands of Vishnu

The Pose Dedicated to Lord Vishnu

Vishnu is often depicted as reclining on Sheshanaga: a coiled, many-headed snake floating on cosmic waters that represent the peaceful universe. This pose symbolizes the calm and patience needed to face your fears and worries, represented here by the poisonous snake. The message here is that you should not let fear overpower you and disturb your peace.

Anantasana is a side lying, reclined pose dedicated to Vishnu. This pose is designed to release tight shoulders and hips all while creating length in your torso, arms and legs. You will also engage your core, strengthening and stabilizing your spine.

By staying sensitive, clear and courageous in all of your poses, you can become more aware of the tiny adjustments that you need to make in order to stay stable in Anantasana.

Vishnu in Your World

Learning the peace and love that radiates from the teachings and incarnations of Lord Vishnu should inspire all whom become aware to practice loving-kindness and peace as we walk about this world. As Vishnu is known as a god who does not lose patience even in uneven circumstances, be also ready to help others and never lose patience.

Acknowledging the Divine in every individual

(Read on for why Patience Really Is a Virtue: One Yogini's Daily Struggle to Practice It More.) 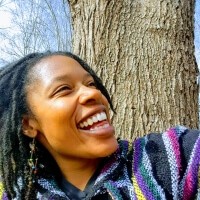 Restless Wild & Free, I am the embodiment of Spirit. I am light, I am darkness, I am creator, I am energy in form and in motion. My very BEING vibrates with complete and total life force. I am here to help, to guide, to remember, to listen. Soulful guide, anointed healer, I AM. Dr. Krishana is a compassionate and intuitive healer, chiropractor, yoga guide, speaker and writer. Follow her journey @intu_me_i_see Full Bio

Experience the 5 Koshas Through Yoga Nidra
Lakshmi: The Goddess of Prosperity
The Meaning of Diwali
Lord Krishna: The Voice of the Bhagavad Gita
An Introduction to Lord Shiva: The Destroyer
Hinduism's Lord Vishnu: Preserver and Sustainer of the Universe