Om namo narayanaya (Sanskrit: ॐ नमो नारायणाय) is a Sanskrit mantra or sacred verse. Ancient in origin, this mantra appeared in both the Tarasara Upanishad and the Sama Veda, and it is embedded in Vedic traditions such as Vaishnavism, a denomination of Hinduism.

Om namo narayanaya has several translations and interpretations, but it is widely considered to be a tool for achieving self-realization and oneness with the Divine.

As a means of humbling the ego, the Vedic tradition recommends reciting om namo narayanaya 108 times, twice a day for 40 days. After chanting the mantra, it is important to sit in silence for at least ten minutes in order to connect with its effects.

Sanskrit for “tool of thought,” mantra chanting is an effective means of harnessing the mind in order to acknowledge the Divine within. 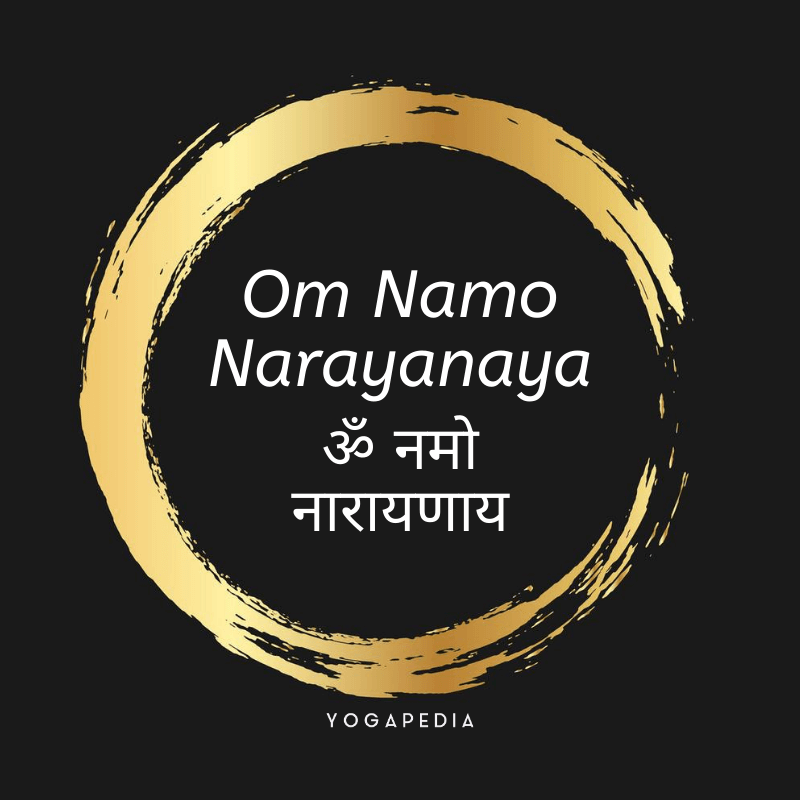 In the Sama Veda, om namo narayanaya is said to have been taught by Vedic seers to the seekers who came to them for wisdom. It is believed that this mantra revealed its significance and meaning to these Vedic seers through their penances, after which they shared it with seekers as a means of self-realization.

Narayanaya has more complex roots and interpretations but is believed to be symbolic of Brahman or the inner self. Om namo narayanaya can therefore be understood as a reverent and respectful means of unifying individual and universal consciousness.

Another interpretation of narayanaya comes from its Sanskrit roots; nara, meaning “water” and anaya meaning “resting place” or “shelter.” Narayanaya may thus be representative of the Hindu god, Vishnu, whose resting place is water.

This is reflected in the Tarasara Upanishad, which states that those who practice this mantra will reach Vaikuntha, the abode of Vishnu. Alternatively, nara can also mean “living entities,” so narayanaya may refer to the “resting place of all living entities.”

Another commonly cited translation of nara is human, whilst anaya can be understood as “direction” or “goal”. As such, narayanaya can be interpreted as the “direction of a human” or that which helps an individual toward their goal of self-realization.

This humanitarian connection may explain why om namo narayanaya is often chanted with the intention of sending positive energy to all people of the world.

As well as assisting in self-realization, om namo narayanaya can be used as a chant for peace, health and happiness for all human beings, particularly when accompanied with visualizations of all beings as interconnected and divine.

For maximum effect, this mantra should be chanted repeatedly out loud, in order to connect with its sacred vibration. When followed by silent meditation, om namo narayanaya can be a powerful tool to unite individual consciousness with the Divine.