Definition - What does Vajrasana mean?

Vajrasana is the Sanskrit name for a seated yoga asana. This posture provides a deep stretch for the quadriceps and the tops of the feet, and is believed to assist in digestion. Vajrasana can be used as a transitional or resting pose between other asana, and it is often used as a posture for meditation.

The term is derived from two Sanskrit roots; vajra, meaning ‘"hunderbolt" or "diamond" and asana meaning "seat" or "posture".

To enter the pose, begin by kneeling on the floor with the knees and thighs together, the tops of the feet on the floor and the toes untucked. Lower the hips and buttocks to sit on top of the heels, keeping the ankles, shins, and knees in one line. Traditionally, the big toes should be together with heels apart, and buttocks resting in the space between the heels. This variation can be challenging for beginners, in which case the buttocks should rest directly on the heels.

Vajrasana may be held for as long as the practitioner is stable and able to maintain a steady breath. There should be no pain or strain in the lower body, and the upper body should be simultaneously upright and relaxed, with core muscles active and shoulders soft. The hands can rest on the tops of the thighs, either with palms down or forming a mudra. 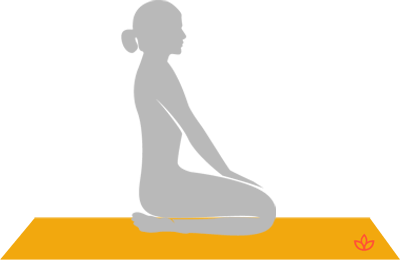 Vajrasana is believed to stimulate the vajra nadi, part of the network of pathways through which prana travels in the body. In addition to its role in awakening kundalini energy, the vajra nadi helps to facilitate digestion. Vajrayana is therefore one of the best postures for increasing agni (digestive fire).

Vajrasana is a kneeling posture, in which the practitioner is able to maintain an upright spine. As such, it encourages a free flow of prana (life force energy), making it an ideal posture for pranayama and other meditative practices. The same posture is commonly used outside of the context of yoga as a position for prayer, and in Japan it is the traditional formal way of sitting, known as seiza.

This posture obstructs blood flow to the lower body, in turn increasing circulation in the pelvic and abdominal area, encouraging bowel movement and improving overall digestion. It is one of few asana that can be practiced on a full stomach and is traditionally believed to be most effective directly after a meal.

In addition to its role in digestion, vajrasana is the best meditation position for those suffering from sciatica, and its other health benefits include:

If this pose causes discomfort in the ankles or knees, a rolled up or folded blanket may be placed below the shins or between the thighs and calves, in order to relieve some pressure. Similarly, a yoga block may be placed horizontally between the feet in order to support some of the body weight in this pose. A more advanced option of this posture is supta vajrasana (Reclined Thunderbolt Pose), commonly practiced in Ashtanga Yoga.