The mantra, meaning, my salutations to the great Lakshmi can be sung, meditated on or chanted. It can be chanted once or a practitioner can use mala beads to perform japa, where the mantra is chanted 108 times. Om shreem maha Lakshmiyei namaha can also be chanted in multiples of nine, if 108 is too many for the practitioner. 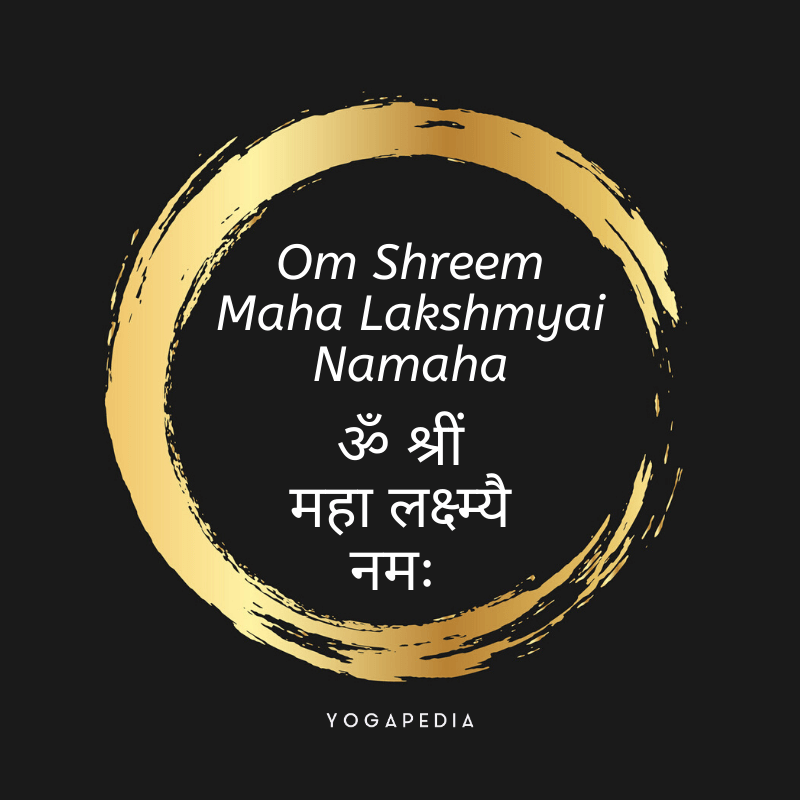 Each word in Om shreem maha Lakshmiyei namaha has significance. It begins as all Sanskrit prayers do, with the word om. “Om” is thought to constitute the divine in the form of sound.

The next word, “shreem”, is the bija, or seed, mantra for the goddess Lakshmi. The shreem mantra is thought to increase beauty and wealth. Shreem has no grammatical significance in this sentence, but it adds to the vibratory power of the mantras themselves.

The following word is “maha”. The word “maha” means great. In this case it means great in reference to the Goddess Laksmi.

Lakshmyai, is actually the name Lakshmi with an ending, “yai” to indicate that something is to, or for, her. In the context of this sentence, our adoration and salutations are for her.

Namaha means salutations. This word is used in most prayers and also in the commonly used word “namaste,” which means "my salutations to you."

As such, om shreem maha Lakshmiyei namaha means "My Salutations to the Great Lakshmi." This statement is from the Shri Suktam in the Rig Veda, which is the oldest of the Vedas.

Lakshmi is the Goddess of wealth, beauty, fertility and abundance. Her consort is the god Vishnu, who is know as the maintainer of the universe. Lakshmi is always depicted elegantly dressed, often in fuchsia, sitting or standing on top of a lotus flower, her hands in the gesture of offering coins and wealth. She is extremely popular and is often pictured along with Ganesha, the remover of obstacles and Saraswati the Goddess of Wisdom.

Music and Mantra
Advancing With Mantras
Abundance-Boosting Mantra & Meditation of Goddess Lakshmi
The Makings of a Japa Mantra and How to Add This Yogic Practice to Your Sadhana
What Makes a Mantra?
5 Benefits of Chanting OM