The Story of Hinduism's Elephant-Headed Deity, Ganesh (and How to Call Upon His Good Fortune)

Takeaway: With the head of an elephant and body of a human, Ganesh has the power to bring you good fortune.

Ganesh (or Ganesha), the beloved Hindu deity of good fortune, has the head of an elephant and the body of a human (aside from his four arms) with a huge, endearing potbelly.

He is revered throughout India, Sri Lanka and the rest of the Hindu diaspora, where he is worshiped as a Hindu god who removes obstacles in both the material and spiritual realms.

One might easily say that Ganesh is the most popular Hindu deity in all of India.

The yogic pantheon has many gods and goddesses, but Ganesh seems to appeal to the masses in a very big way.

This might be because he brings good luck. He also brings auspiciousness and success.

Here we'll share a bit about the Hindu mythology of Ganesh, his symbolism and how to call upon his obstacle-removing powers regularly. 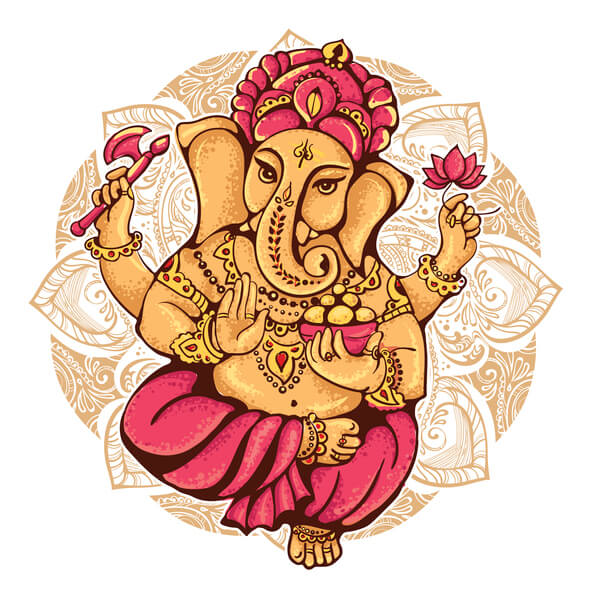 The Story of Ganesh

One mythological story in particular explains why Ganesh gets things done so fast. It goes something like this:

Ganesh is the son of Shiva, and Shiva was once given a special mango fruit by Narada, a wandering saint. Shiva said to his sons, “Whomever travels around the universe the fastest will receive this special mango.”

So, Ganesh’s brother jumped on his peacock and traveled around the world in a few days. Now, Ganesha, the clever one, figured out that the fastest way to travel around the universe was to go around his father because Shiva is the universe.

Ganesh then traveled around both his mother, Parvati, and father, then proceeded to ask for the mango fruit, which Shiva then gave to him.

The significance of the story is this: don’t look outside of God to learn about the universe and life.

You must turn to God to ask for miracles. We typically go everywhere except to God, which is why things don’t get done as fast as we’d like them to.

However, when you establish yourself in the wisdom of Ganesh, you will take on superhuman intelligence and the ability do get things done quicker. Simply put, Ganesh is the shortcut to success.

Whenever you find yourself on the threshold of a new beginning, call upon Ganesh to help you make your journey as free from obstacles and troubles as possible.

Ganesh Chaturthi is the Hindu celebration of Ganesh's birthday. It is celebrated in August or September depending on the Gregorian calendar.

You can take part in the celebration by installing a Ganesh idol in your home or publicly, and by offering daily prayers to Ganesh.

Take time on this day to say thanks to Ganesh, and, perhaps, ask him to watch over you on your path forward and to help you find the path of wisdom. 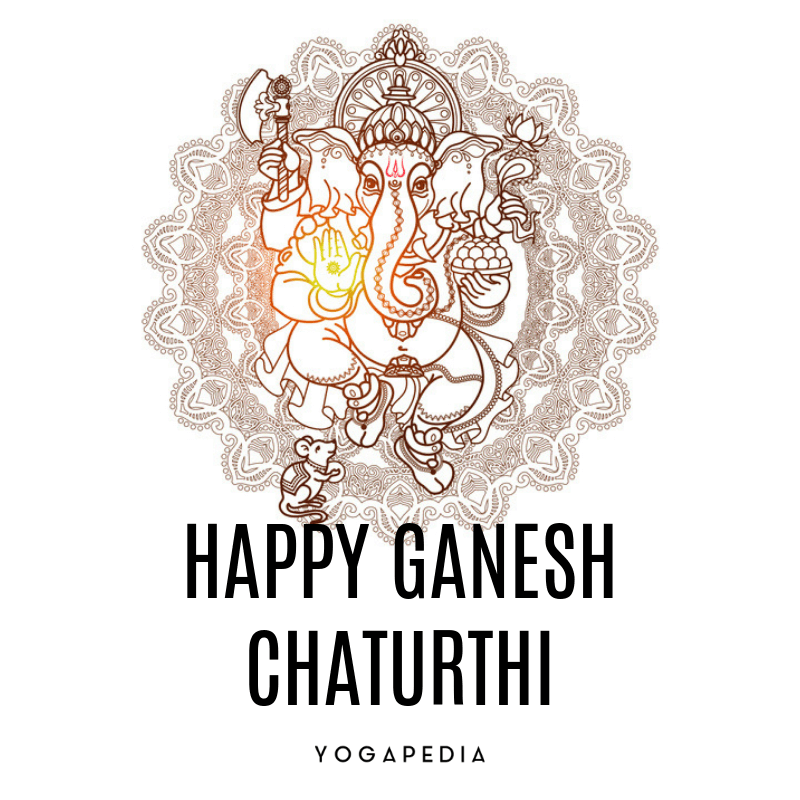 Symbology of the Elephant-Headed Deity

Another important aspect of Ganesh is his symbology. One is of the little mouse that transports him wherever he wants to go.

The mouse symbolizes our minds and as Ganesh rides the mouse, he soothes the mind.

The reminder here is that all of our obstacles come from our human minds and Ganesh allows us the power to still the mind until it is totally still and at peace.

Ganesh also reminds us that the truest source of all our happiness comes from within.

This inner sense of joy is symbolized by the sweet enlightenment that Ganesh holds in his hand.

This sweetness is constantly reminding us of our true nature, which is totally at peace, vast and unchanging.

No matter what’s going on in the external world, we are totally at peace, in a state of bliss on the inside.

Another one of Ganesh's four hands represents fearlessness as it forms the mudra that stands for complete and total fearlessness.

We are reminded that we are in our essence, free of fear – even in times of chaos. (Read more on mudras in The Best of The Mudras.)

Ganesh also holds an ax in one hand. This ax symbolizes the chopping of our human egos, which so often gets us into trouble, pulling us away from our higher Self.

With this ax, Ganesh chops at all the sensory pulls that the material world has on our ego. Yet another hand holds a noose, which reigns the ego in, so that we can move faster toward enlightenment. 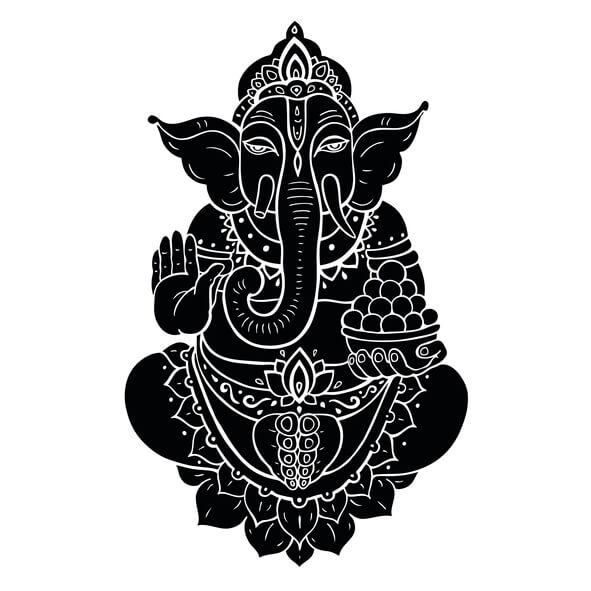 How to Call Upon Ganesh

Ganesh’s big elephant head is responsible for his superhuman intelligence. One of the biggest boons Ganesha offers us is his ability to do things instantaneously.

This makes sense for us humans living in contemporary society.

We want to make things happen as soon as possible. We want fast travel on airplanes, fast communication via text and emails, fast knowledge via the Internet – the list goes on.

But sometimes our human powers aren’t quite good enough. That’s where we can call upon the superhuman powers of Ganesh to help us speed things up.

When chanting to the elephant-headed deity, you recite this mantra: Om Gam Ganapataye Namaha. This is the mantra to invoke Ganesh when you need to remove obstacles in your own life.

In the Hindu tradition, you can use a mala of 108 beads to help you chant Om Gam Ganapataye Namaha 108 times. This makes the mantra more powerful and, of course, the more you chant it, the more potent it becomes. (Learn more about the practice of Meditating With Mala Beads.)

Get Your Good Fortune

Ganesh has the power to help us reach a state of enlightened consciousness even as we reside in our human bodies and minds.

The more we meditate on Ganesh and the more we make him a part of our daily rituals, the faster we will come to know his power!

Yogapedia's editorial team is dedicated to writing and curating authentic yogic knowledge from around the globe. Our intention is to help seekers turn within and connect with Self (Ātman) through shared understanding of the philosophy and practice of yoga. Full Bio

What Makes a Mantra?
The Story of Hinduism's Elephant-Headed Deity, Ganesh (and How to Call Upon His Good Fortune)
Ahimsa: The Number One Yama of the First Limb of Yoga
The Main Message of the Upanishads Explained
Not All Asana: The Eight Limbs of Yoga and What They Mean for Your Practice
Yogapedia's Interpretation of the Bhagavad Gita