Takeaway: Restorative Yoga and Yin Yoga are often used interchangeably, but there are many differences between the two.

Slower-paced styles of yoga have increased in popularity to help balance out busy lives and fast-paced styles of yoga, like Ashtanga and Vinyasa. Restorative Yoga and Yin Yoga have the ability to down-regulate the sympathetic nervous system to promote relaxation.

Students do not have to have any previous experience in yoga before trying either style. Both styles can be meditative forms of yoga, where holds are longer and movement is limited in order to still the mind and connect with the body and breath on a deeper level.

They are often classified into the same category, however, they are not the same style of yoga. While searching for what style is right for you, it is important to know the difference between them.

In a typical Restorative Yoga class, there will be around five or six poses per class, including both sides of the body. It may not seem like a lot, but once you get into each pose, you will be holding it for quite a while. It also takes time to get the students supported into each asana. Some instructors may include counter poses or movements in their restorative classes as well.

A yin yoga class will typically consist of under ten poses per class and some asanas will need to be done on both sides of the body. This does not include active "yang" movements and counter or resting poses. Yang movements help bring energy back into the area that was being stretched. While counter poses are movements or positions for the body to move in the opposite direction of the held pose. Resting poses are necessary to give the body a full break after a deeply held pose.

Restorative yoga involves many props like pillows, bolsters, blocks, straps, eye pillows, wedges, blankets, etc. The idea with the use of props in restorative yoga is that the student is being fully supported by the props, thus allowing full relaxation.

Yin yoga does also involve quite a few props like bolsters, blocks, and straps. These props are used to support the body based on levels of flexibility. Some yin poses are possible to perform without the use of props. Props in yin yoga are used to help the student find the perfect balance where they feel a stretch, but no pain. Props can help either increase or decrease levels of intensity of a pose. The use of props makes yin yoga much safe and accessible to most people, compared to faster paced styles of yoga.

Yin yoga typically involves hold times of 45 seconds up to five minutes per pose, but can go up to ten minutes depending on the part of the body that is being targeted and the instructor. For example, stretching the neck will require a shorter hold time than stretching the hips. The idea is to remain as still as possible in the pose for the time allotted. Students may, however, come out of a pose if they feel it becoming too intense, or for any other reason.

It is important for the student to not stretch to their limits at the beginning of a pose, because it is likely that they will not be able to hold it for the full time. As the minutes pass, the body starts to release and allows for the student to move deeper into the pose, if they so wish. They may need fewer props by the end of the pose.

Yin yoga can be as intense as you make it out to be. It is important to listen to your body and either get out of the position, if you’re feeling extremely uncomfortable, or to back off and not go as deep into the pose.

Restorative yoga involves hold times of five to ten minutes, but can go upwards of 20 minutes per pose. It typically takes a minute or two to get supported into each pose, and once the body is perfectly comfortable, the yogi should remain in that position for the duration of the pose without moving. Typically, once the student is supported in the pose, they do not move. Because restorative yoga is so gentle, the student should be able to remain in that same position for the duration of time, but the student may also come out of a pose for any reason.

Students, who plan to attend yin and restorative classes, should always discuss with their doctors before attending and let the instructor know their medical history before class.

Almost anyone can do restorative yoga as there are only a few contraindications. Because of the gentle nature that restorative yoga holds, is it typically safe for those with injuries. This type of yoga helps its students get back to their version of normal. Because this style fully supports the student, there is minimal risk of causing injury or further harm to an existing injury.

Yin yoga has many more contraindications, and therefore, a student should be careful attending a yin class with an existing injury or preexisting condition. Yin, although relaxing, has the ability to be quite intense on the body. The poses in yin are more catered to students with normal functioning bodies and minimal injuries or risk of injury. This style is meant to help them reach a deeper level of stretch and those with injuries may or may not benefit from the poses.

Although both practices are great for deep relaxation, these styles of yoga serve different purposes. A student should never feel pain in either style.

In a yin yoga class, the student is meant to be taken a little bit out of their comfort zone. A yin practice is great for deeply stretching the connective tissues of the body- the tendons, ligaments and fascia. Yin yoga will likely increase flexibility. (Learn more in Yin Yoga: 4 Benefits of Surrendering to Your Yoga Mat.)

In a restorative practice, the student is meant to feel fully comfortable and supported in each pose. Because yin can open up different areas, intense feelings may arise. Yin yoga may be uncomfortable, where restorative is very gentle.

In a restorative practice, it is meant to move the body into different positions, but promote deep relaxation. With the use of props, as mentioned, the body will be fully supported and therefore, allowed to fully relax. A Restorative practice may increase flexibility, but that is not its main purpose. (Learn more in Restorative Yoga: What to Expect On and Off the Mat.)

In both styles, the student is meant to be still in both the mind and body.

Why you Should try a Slower Paced Style of Yoga

Busy lives and a constant need to feel connected to the outside world minimizes our abilities to stop, relax and look inward. Whether you choose to try yin or restorative yoga, both are a great way to find balance from the constant yang in our lives. 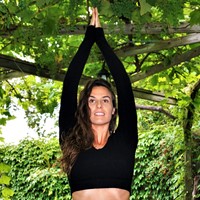 Christina Rosso is a yoga instructor, holistic nutritionist and bio-energetic practitioner currently traveling the world. After completing her Yoga Teacher Training 200hr in India, she has become passionate about spreading awareness of proper alignment in yoga in order to minimize yoga injuries and maximize asana benefits. Her goal is to inspire the world to start their own yoga journey and to educate those who have already begun. She specializes in Yin, Hatha and Aerial Yoga, and understands the importance that multiple styles of yoga have in her own life.

Yin Yoga: 4 Benefits of Surrendering to Your Yoga Mat
Soothing Anxiety With Restorative Yoga
Turn That Yawn Into Yin and Relax Into This Style of Yoga
Restorative Yoga: What to Expect On and Off the Mat
20 Minutes of Yin Yoga
The Practice of Surrender