Takeaway: Goddess Durga is a powerful entity waging a war against evil - the evil that lies inside of us as well as the evil that tries to harm us from the outside. To understand the power of Durga is to understand your own power.

Durga is the righteous, fearless, protective mother of the universe. The all-powerful embodiment of shakti - the creative feminine energy who brought the universe into being - Durga wages a war against the corruption of the human spirit.

A powerful entity, Durga is an important figure for all practicing yogis. Understanding Durga’s teachings allows us to summon her power and find all her qualities within ourselves.

What’s in a Name: The Meaning of Durga

“Durga” is a Sanskrit word that means “inaccessible fortress” or "a place that is difficult to overrun."

This name is indicative of Durga’s fierce, powerful, and militant nature.

Much like a mama bear, Durga is powerful and unstoppable when it comes to protecting all that is good and pure in the universe - and within all of us.

Durga is often called Durgatinashini, which means “the one who takes us through difficulties" or “the one that eliminates suffering”.

Durga is also known as Devi or Shakti. “Devi” simply means Goddess, and “Shakti” is the term for a feminine force which gives life to the world.

These alternative names only reaffirm the idea of Durga being the embodiment of a pure, feminine force - a force that creates, nurtures, grows, and fiercely defends. (Learn more in O-M-Goddess! 5 Ways to Awaken Your Divine Feminine Shakti Energy.)

The Myth of Durga

Durga’s story is told in the Devi Mahatmya, a Hindu religious text that tells the myth of the Great Goddess and the many battles during her quest to protect goodness and serenity in the world. In Sanskrit, Devi Mahatmya means “Glory of the Goddess”.

Unlike most other deities, she didn’t grown into her power - she was created as power, as a pure force. 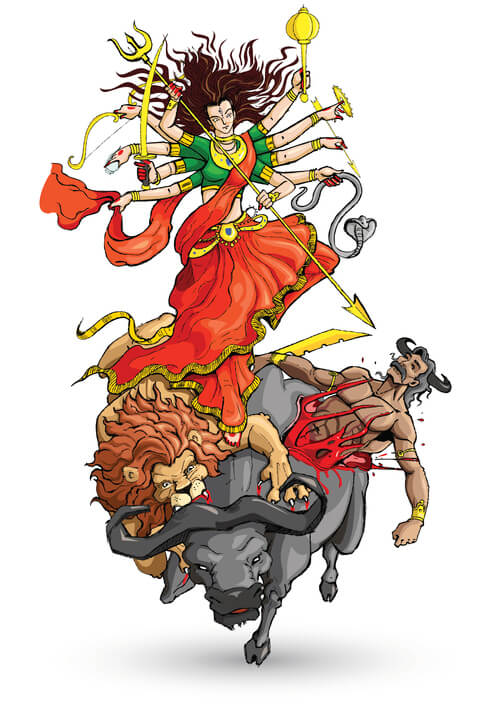 The Gods that created her were themselves unable to defeat the demon Mahisasura and so they created her by combining all of their energies into one magnificent being.

In the text, Durga is depicted as a fearless, invincible warrior fighting against evil. The Devi Mahatmya tells numerous stories of her fighting asuras - demons that cause bloodshed and destruction on earth.

On a metaphorical level, each of the demons depicts destructive qualities of the human ego, such as greed, pride, hypocrisy, arrogance, and anger.

By fighting the demons, Durga is defeating these negative qualities that ruin humans, our spiritual serenity and clarity of thought.

Durga’s true quest is the restoration of balance in the universe. Her fight is a fight for the harmonious coexistence of humans and nature.

Each year in late September or early October, in the Hindu calendar month of Ashwin, Durga is celebrated with a nine-night long celebration called Navratri.

Navratri begins on the first new moon in early autumn. This year the celebration is from September 29th to October 7th. 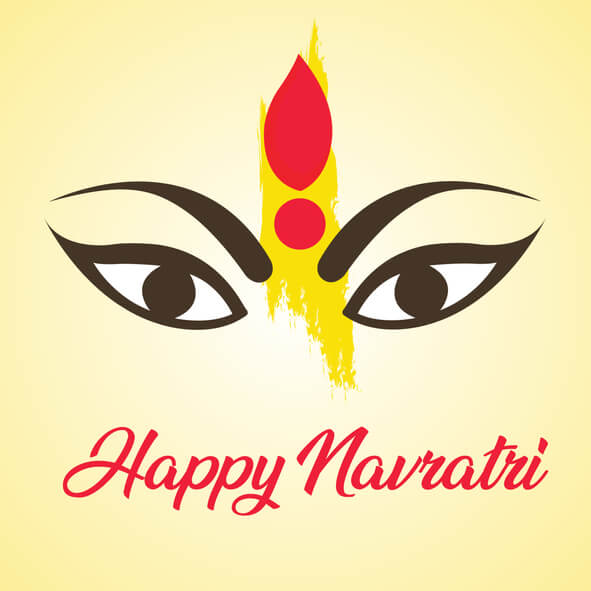 Navratri celebrates the battle between Durga and Mahisasura - the battle of good versus evil. Each day of the celebration is dedicated to a different incarnation of Durga.

The festival is celebrated in different ways in different parts of India and the world. Celebrations generally include reenactments of Durga and Mahisasura's battle, colorful clothing, dancing and chanting of Hindu scriptures.

Navarti honours the divine feminine and the victory of good over evil.

In art, goddess Durga is represented as having between eight and eighteen arms. This goes in line with her role as the protector - an all-powerful mother, Durga has enough arms to keep all her children safe and to fight all the foes that come after the good and the righteous. 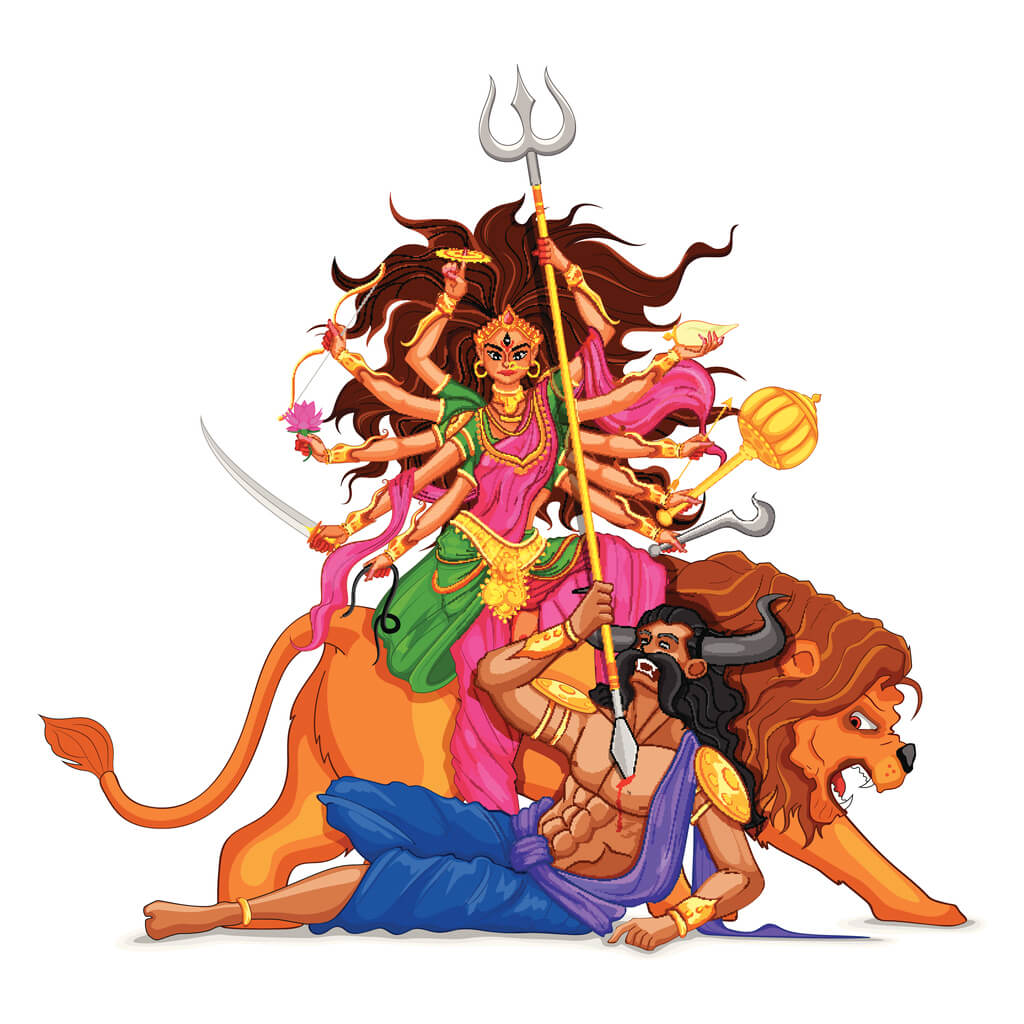 Durga is always shown either mounting or taming a lion or a tiger. The elegant beasts that symbolize strength and victory are there to represent Durga’s inner power and fierceness.

In each of her many hands, Durga is shown as carrying a weapon. The weaponry she carries to slay demons is symbolic, representing a certain quality, type of energy, or specific power.

As the number of arms Durga is depicted with varies, the weaponry she carries varies as well, but the most significant object she’s always depicted with are:

(Learn more in A Guide to Hinduism's Leading Goddesses.)

The Teachings of Durga

At the core of the myth of Durga lies the great battle for righteousness, goodness, and unfailing power to maintain a just and balanced universe.

Durga’s Message: Harm to Others is Harm to Yourself

The many stories of Durga’s brave battles against the asuras should be interpreted as metaphorical.

All of these qualities are destructive qualities: when we have them, they don’t only harm those around us, they harm our own souls.

Under the burden of these destructive qualities we are unable to reach our full potential, connect with others, with nature, with the divine, or with ourselves.

By slaying the demons, which symbolize these destructive aspects of human nature, Durga restores balance in the world by freeing both the world and ourselves from our own potential for evil. 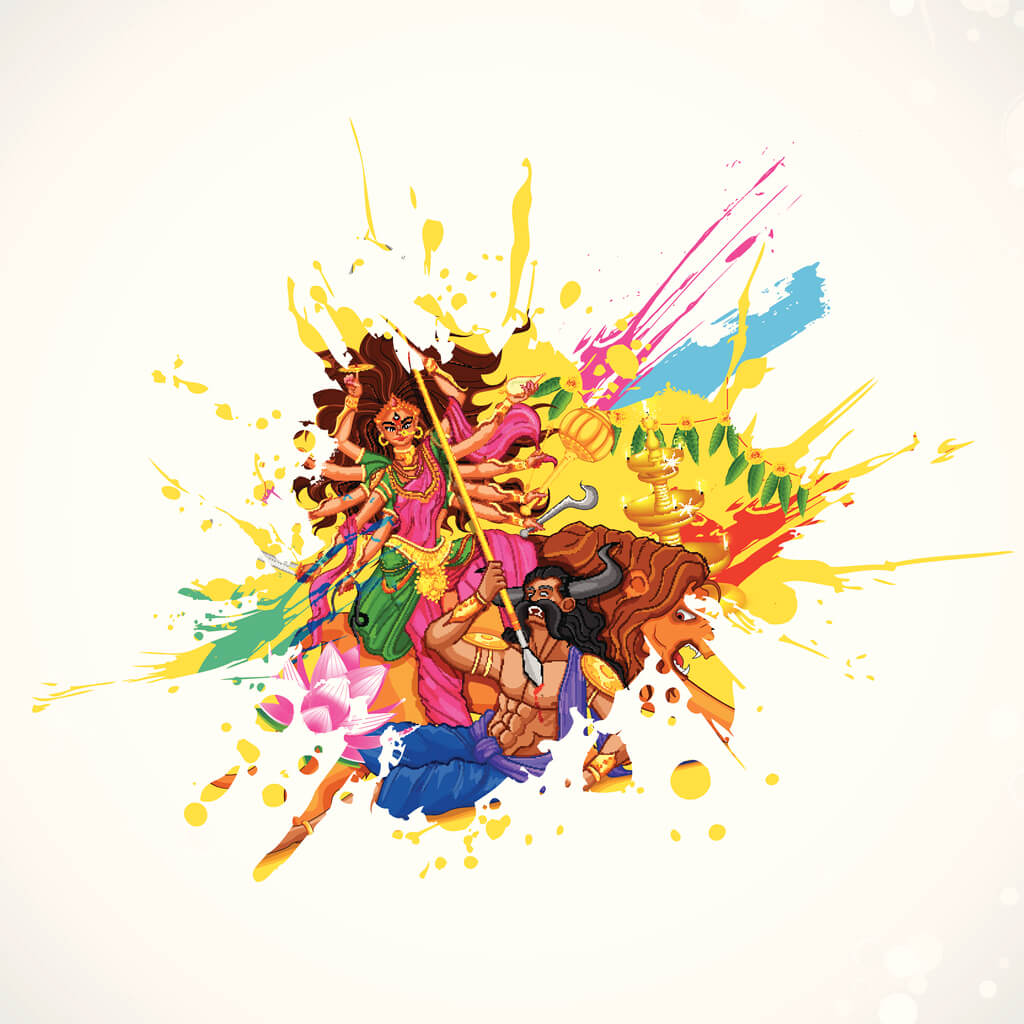 Durga teaches us that the destructive aspects of the human psyche are destructive inwardly, and not only outwardly.

Unjust, violent actions result from a lack of inner peace, from an imbalance that lies at the core of the person. This imbalance manifests as hateful, dangerous, destructive behavior.

Durga teaches us, however, that those who harbor negative emotions and a selfish, overbearing ego harm themselves as much as they harm others.

(Learn more in Shiva and Shakti: The Nature of These Divine Masculine and Feminine Energies Within Us All.)

One of the most significant teachings of Durga is told through the story of Durga’s battle with the demon chief. As Durga shoots an arrow at the demon, the demon bleeds and from his drops of blood new demons are formed.

This story teaches us that negativity feeds on negativity: one negative thought will give birth to another.

The demon that Durga battles is the inner demon we all have inside of us - the potential for harmful, negative, selfish thinking.

Our thoughts shape our reality, and harboring destructive thoughts and negative emotions only gives birth to more negativity and self-destructiveness.

Durga teaches us that the chaos, misfortune, and the hurt we experience in our lives often comes from within, and that the place to start cleaning out the negativity is inside and not outside of ourselves. (Learn more in How to Choose Love Over Fear With Each Thought.) 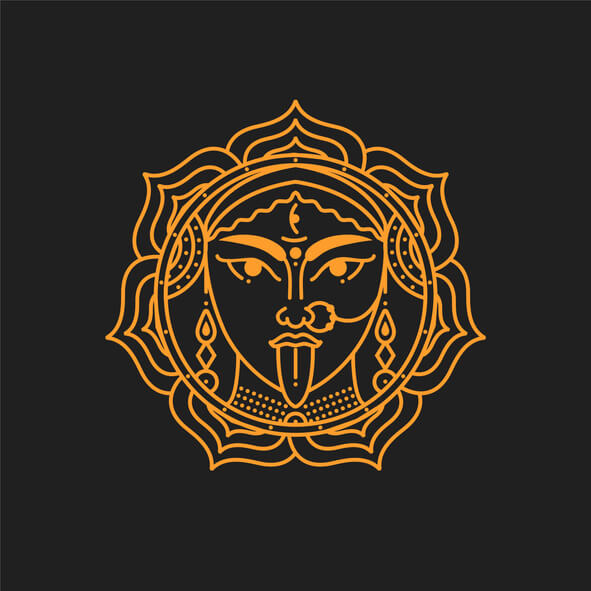 In the final chapters of Devi Mahatmya, Durga teaches us one of her most important lessons: we have endless potential within ourselves.

Battling the demons in an effort to save the world from destructive forces, Durga releases the Matrikas. The Matrikas are eight goddesses which are Durga’s other shakti - they exist within her, together they form a powerful collective.

Only by releasing these other aspects of herself and working together with them, with all their energies and all their powers, Durga is able to be victorious.

Durga teaches us that we are at our best and at our most powerful when we recognize, acknowledge and accept all aspects of ourselves.

Only when we are whole are we truly powerful.

Only when we are whole are we able to live up to our full potential. Only if we are conscious of the entirety of ourselves, warts and all, will we be victorious. (Learn more in Escaping the Maya: 5 Tools to Reconnect With Your Inner Self.)

A key component of yoga is meditation. While meditating on certain entities, we summon their power and learn to find it not only in the outside world, but in ourselves as well.

Meditating on a particular deity allows us to channel their energy.

To summon Goddess Durga in meditative practice is to summon strength. Meditating on Durga is a practice used in situations which feel hopeless.

If you find yourself facing seemingly insurmountable problems, if you feel powerless or stuck, meditating on Durga will reconnect you with your inner power and help you rediscover your inner strength. 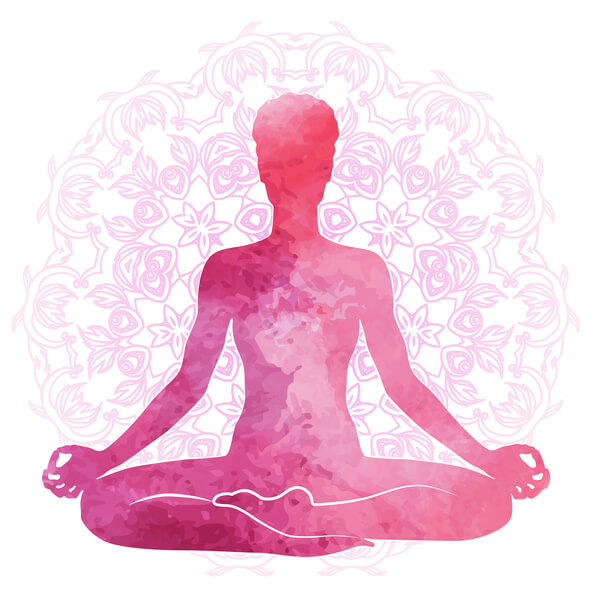 Goddess Yoga and the Power of Durga

Goddess Yoga is any practice in which yogis focus on the shakti.

As the shakti is the feminine creative energy that gives birth to the universe, to channel shakti is to channel goddesses. (Learn more in Invoking the Divine Feminine in Yoga: How to Call Upon 5 Popular Hindu Goddesses.)

This is achieved by meditating on a specific goddess to invoke her energy and achieve a better, more personal relationship with their teachings.

Durga is a favorite among the goddesses. A supreme deity, invincible, all-powerful, and righteous, Durga is a warrior tirelessly fighting for a balanced, peaceful, and righteous world in which we all achieve our full potential and live in harmony with ourselves, others, nature, and the divine.

To summon Durga in your meditations is to summon the inner strength needed to be victorious over your own negative thoughts and emotions, and to defeat your own potential to be destructive and cause harm.

With her name having the meaning of an unconquerable fortress, awakening Durga within ourselves is finding this safe, invincible fortification within our own spirit.

4 Steps to Making Your Shakti Shimmer
Shiva and Shakti: The Divine Energies Within Us All
5 Ways to Awaken Your Divine Feminine Shakti Energy
Happy Navratri! Celebrate Hinduism's Warrior Goddess Durga
A Guide to Hinduism's Leading Goddesses
Invoking the Divine Feminine in Yoga: How to Call Upon 5 Popular Hindu Goddesses