Recently, we caught up with yoga DJ, DJ Taz Rashid, during a podcast and discussed a playlist he created for us that focuses on meditation, chakras and consciousness.

{You can listen to the Yogapedia Flow Mix on Spotify.}

We interviewed him on the project and this is what he had to say:

Tell us how you feel about this playlist.

DJ Taz: I feel really great about this playlist, it has different elements of world music that I grew up with, that I have enjoyed in the last year. A lot of my original music is on there, along with other musicians that I've been listening to.

It conveys the feeling of oneness and connection through a global sound; you can really hear that in a practice. When you hear sounds from different parts of the world, different energies, and in a practice, it feels like all of the different cultures are coming together. That's what excites me. It's like a United Nations experience in a yoga class.

It wasn't intended to be created that way. After I put it together and looked at it, I was like, wow, there's a lot of different worldly sounds in there, and that's nice.

What kind of mood are you trying to convey with this playlist?

DJ Taz: I would say a mood of unity, a feeling of connected-ness, and that can easily happen through music. Even if you don't know where the song is from, you can tell it's from a distant land or maybe even a part of the town you're in that has a lot of different people in it.

So if it's like a West African song, it could be from a part of West Africa, like, Ghana or something like that. But it could also be a part of – I live in Chicago – a part of Chicago where a lot West African people live or come together to hang out. So, it's like a distant sound, but it's also near to us, as something we know first-hand. You know, we'd be surprised who's near us in our lives.

We delved into the world of meditation with DJ Taz to discuss whether his music could work in a meditative practice and find out how he feels sound can affect yogis during meditation.


How effective are the sounds in a meditation practice?

DJ Taz: I think sounds can be important. I personally love music during meditation, but I love silent meditations as well. But for the sake of this conversation, sound-wise, I love very ambient music during meditation. I really think it's good to be without beats during meditation if you're just really trying to center in. When you have beats, it sends a different message to your body chemistry that can be confusing during a meditation. And there's a word that's called "drones", d-r-o-n-e-s, that could be like a tampura, almost like a trance-inducing sound. It's sometimes very dreamlike, and I love creating music like that, and for meditations, I feel like those work really well.

There's definitely different frequencies and different waves people use, like delta and beta waves for different types of practices. I don't have a lot of that in my music, particularly in that form, however, I do know the power of it, and I use that sometimes for meditations. (Read on in Music and Mantra).

So, what type of yoga is this playlist for, and would any of those songs work for meditation?

DJ Taz: Yeah. Yeah, this is more for, like the straight-up vinyasa flow sequence classes. It could be sound healing, but I wouldn't say it was created with the intention of a meditation for sound healing or anything like that.

There's actually three tracks that work well with meditation especially. The first track, "The Morning Dew," can be used for meditation, also, the "Heart: Peace" track from my "Chakra Journey" album can be easily used for meditations. The third, the "Moola Mantra," instrumental track can definitely be used for a meditation as well. (Learn more in The Power of Vinyasa).

Do you have a favorite song on the playlist right now?

DJ Taz: Well, for meditation, I've been playing that "Moola Mantra" track a lot. I can feel the energy in the class of rest and of relaxation. You now, it's a very easy track to play that can capture that emotion, for meditation. And for vinyasa flow, from my tracks, "The Native Spirit" is a great track from my latest album, made with the musician Srikalogy. He and I created this album and it's been a great one. I'm playing my flutes on it, guitars, instruments like that. It's another one that flows really well with vinyasa flow sequencing.

DJ Taz has been a persona that's years in the making, often filling a void in yoga. We talked about his beginnings with this style of music and how it has evolved over the years.

What led you to make yoga music and mixes, and has your music evolved over the years?

DJ Taz: It was never really planned, to be honest. I didn't start my musical journey and say, “Hey, I wanna make yoga music!” It was more of a necessity - just where I focused on what I wanted to create. As musicians and producers, we can make anything we want; it's an empty slate.

In terms of evolution, I think my production skills have improved. I'm learning a ton. I'm still learning. I also partner with different producers for different projects here and there. Not always, but sometimes. So a lot of my albums sound very different. It's like, as a musician, we're always looking for our own unique sound, you know? At the same time, because of the world I'm in, I wouldn't want all my albums to sound very similar. Because I'm offering different albums; the more different sounds you have, the better, because you're curating playlists for people. I feel like I could create a playlist of, like, 10 or 12 of my songs, and people would have no idea that they were all from the same musician.

Is there someone that inspires your music, or do you get inspiration from a variety of sources?

DJ Taz: Yeah. I really love the energy of Moby. I don't know, I always have. He's got some albums that I don't care about as much, but there's something energetic about him, and I feel like it's very heart-opening. And there's a certain energy that's in there that creates emotions within me when I'm hearing it. I want to create some music for yoga where it's like you're being sucked up into the heavens by your chest on your yoga mat. Almost like a cosmic experience.

That's really my intention for creating yoga music, and some of it has that energy. Some of it's just like, more beats, and things are happening. My wife always tells me that's where my strong suit is, for some of the tracks I've created have that energy. So he's a big influence in that way. It's not like I'm listening to his stuff non-stop and trying to emulate it. It's that energy that I emulate. You know? He definitely plays a big role in that way.

While meditation and energy are aspects of importance to DJ Taz, we wanted to know his take on consciousness in yoga and if his music could affect that aspect of a yogi's practice.

What would you have to say about music and consciousness? Can music create a higher awareness?

DJ Taz: I think music can do that for us. There are billions of songs out there. There are so many musicians out there, especially now, everything's accessible to us. And as individuals, we are affected by music in different ways. You may hear a song and be like, “Oh my God, it's so heart-opening,” and someone else may hear it and be like, “Oh my God, that's so cheesy. I don't feel anything.” But then they hear something else and think, “Oh, yeah, that's cool. I feel it.”

So, we have different ways of being affected by music. And we have to find the mood we want to be in at specific times when looking for yoga music. Music can create emotions and trigger memory. There's a lot of memory that's built into music. So, we'll hear a certain song and a certain memory will open up, which can create a certain emotion within us. Everything that we've experienced is stored within us. It's all there, we just have to find it. Sometimes it'll be a song, or a smell or something that's awakening your senses for whatever happened in the past to come rushing back. At the same time, I feel like there are certain frequencies and sounds that, whether you know that song or not, if you close your eyes, you can feel that song from a cosmic standpoint. You hear something and you're like, “Oh my God, I feel like this music is, like... I'm in heaven,” or something like that.

Chakra music: how do you come to this? What inspires you to touch the different chakras?

DJ Taz: We all have chakras, and they're unique in a sense where they're all opening and closing. It's all emotional stuff. And based on whatever we've experienced in our life, we have all experienced certain emotions and experiences that have affected out chakras in different ways. Whether it's our power chakra or our creative chakra.

There's like a flow of energy that's always going through us. This is, like, our kundalini energy, our shakti, our chi, prana flow or whatever we want to call it, that's going through our chakra system, which is like our energy system. But it all depends on how energetic we were feeling or what kinds of foods we're eating, different life choices and decisions. Our chakra is kind of like a vortex of energy. It opens and closes. There are certain schools of thought that have different ideas of how tone and music can be related directly to certain chakras. The one I prescribe to is the one that describes the key of "C" as the root chakra and then D, E, F, G, A and B. That's one school of thought. But then there's other ones that have different notes. So, what I've learned from my research is that regardless of which school of thought we're following, it comes down to intention, of how the music. I am holding intentions of unity, deep love and healing for all my audiences when I am creating music or performing live. 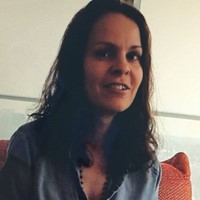 Sharleen Oborowsky is an entrepreneur, free spirit, yogi, and mother, anchored in her joie de vivre. Sharleen co-founded Yogapedia in the summer of 2015 and is presently CEO. Yogapedia for her is more about her sadhana (practice) than business which inspires the writing. When she’s not doing yoga, she’s working on the business as well as raising her children.