Yoga Therapy for Improving Sleep and Memory in Cancer Survivors

First off, lets define Restorative yoga as a combination of meditation, pranayama and supported postures that provide complete support of the entire body so as to promote deep relaxation. Deep relaxation has many benefits in the body - reducing stress, promoting healing, providing “unplugged time” from devices and demands, and allowing the whole person some quiet time for deep rest and reset.

Honing in on rest, and more specifically, sleep, restorative yoga can be incredibly beneficial to those struggling with getting adequate sleep. It turns out that sleep is one of the cornerstones of good health - without it we die. All of our functions from the beating of our hearts to the formation of our memories depend on adequate and regular sleep.

Looking at yoga as a therapeutic tool, there have been several studies ranging from its effects on pre- and post-natal health to helping athletes recover from injury. In this article, however, I will focus on the literature surrounding how the therapeutic use of yoga can enhance sleep, and thereby, memory in people with significant medical issues.

There are several phases of the sleep cycle and during these phases, one of the many things that our brains do is convert the information we have acquired during the day and deposited into our short term storage hub, the hippocampus, to our long term storage vessel, the cortex. Interestingly, the hippocampus, our ‘short term memory storage bank’ needs sleep to ‘download’ its information into long term memory in our cortex. If the hippocampus is not allowed the space and time during sleep to ‘discharge’ its newly acquired information, it can ‘exceed its storage capacity’ thereby disallowing us to even remember short term things like, ‘where did I park my car” or 'why did I just go upstairs’ (1). With inadequate sleep, we become impaired in our ability to acquire and process new information. This is a particular problem in cancer survivors - many of whom have endured various therapies spanning from surgery to chemotherapy to radiation.

My most recent review of the medical literature on yoga therapy and restorative yoga was centered on cancer survivors and cancer-related cognitive impairment (CRCI). The rate of CRCI is as high as 75% in this population. These effects can last for months or even up to 20 years (2). Interestingly, there is a direct correlation in this body of evidence that links CRCI to sleep problems in these same patients. Up to 90% of cancer patients report difficulty with sleep post-treatment (2).

In September of 2013, in the Journal of Clinical Oncology, Karen Mustian et al., published an article titled, “Multicenter, Randomized Controlled Trial of Yoga for Sleep Quality Among Cancer Survivors.” The primary goal of this paper was to compare the effectiveness of a standardized yoga intervention with standard care for improving sleep quality in post-treatment cancer survivors. 410 survivors suffering from moderate to severe sleep disruption were included two to 24 months post-treatment including surgery, chemotherapy and/or radiation therapy. The yoga intervention was YOCAS, developed by the University of Rochester - and consisted of pranayama, gentle Hatha and restorative yoga postures and meditation two times per week for 75 minutes each. The control group received standard care that did not include yoga therapy. The results showed that yoga participants had greater improvements in sleep quality which led to less daytime sleepiness, less use of medications and more healthy functioning during the daytime.

A secondary analysis of this data set by Michelle C Janelsins et al., in an article titled, “YOCAS Yoga Reduces Self-Reported Memory Difficulty in Cancer Survivors in a Nationwide Randomized Clinical Trial”, was published in September of 2016 in Integrated Cancer Therapy. This study looked at YOCAS in a subgroup of 328 cancer survivors from the September 2013 study by Mustian et al. As in the former study, half of the participants were randomized to yoga therapy and the other group received usual standard care.

The YOCAS group had a 19.2% improvement in memory compared with a 5.4% improvement in controls. This was the first study from a large randomized controlled trial (RCT) to show that YOCAS yoga improved overall sleep quality, but also significantly reduced perceived memory difficulty in cancer survivors. The fact that this was an RCT is a big deal as there are not many studies of this type in the yoga literature. These are the studies that many healthcare providers and healthcare organizations look to when implementing treatment protocols as they are less likely to be biased.

I think it is a safe bet to extrapolate this data when using restorative yoga in a non-medically complicated population to improve sleep quality and memory among many other things. There is little downside and if nothing else, it gives us a venue to pause, reset and recalibrate. The studies above help support the role for restorative yoga to build better patterns in our bodies to allow for restful, nourishing sleep - one benefit among many in the restorative yoga practice. When thinking about using it to target a specific population therapeutically, it is nice to have some robust data to reference as we implement our treatment strategies. 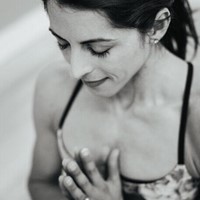 Amy Sedgwick, MD, E-RYT, is a Yoga Medicine instructor based in Portland, Maine where she practices emergency medicine. Full Bio

Quiz: What’s My Dosha?
How to Practice Lion's Breath
Using Your Drishti to Improve Focus
Tristhana: The Three Elements of Ashtanga Vinyasa
Get Grounded This Earth Day and Try 'Earthing'
Six Ways Sleep Can Be the Gift You Give Yourself All Year Long