Yoga and Pregnancy: The Merging of Heaven and Earth

Takeaway: Allow the following yogic practices and philosophies to assist you in your phenomenal journey that is pregnancy.

Pregnancy is the highest form of creativity we know as humans. As a young woman of child-bearing age, it’s becoming clear to me that pregnancy is also one of the most powerful expressions of femininity. Gazing at the ethereal beauty that is a pregnant woman, it is easy to see the magic brewing just below the surface of her tummy. As a new light being is coming into fruition, her shakti is more powerful than ever, reaching full feminine embodiment, undeniable radiance and unfathomable intuition.

In this article, Kim Stanford -- midwife to more than 400 attended births and an Ayurvedic practitioner -- helps to explain the essence and energetics of this magical phenomenon through the lens of yoga.

When a pregnant yogini is moving through asana with her heart and not her head, injuries are less likely to happen. Listen deeply to your body. Practice ahimsa toward yourself and treat your body with gentleness. “Her intuition becomes her super power. When she connects through her heart, crown and third eye [chakras], her connection with that baby is so profound that no textbook or doctor's knowledge can touch it,” says Kim.

Some asanas to be mindful of during pregnancy include: deep twists (utthita parivrtta utkatasana), extensive abdominal work (navasana, plank pose and kapalbhati) and intense inversions (handstands and headstands). These postures can cause serious placental abruption and strain on the uterine walls, so be weary of using them in your practice. Instead, try modifications such as open-armed twists, plank with knees on the floor or gentle inversions.

Next, avoid hot yoga as it may cause unsafe body temperature for the fetus. Kim adds, “Hot yoga is also a yang practice and with the amount of yang energy in Western culture, it is best for us to embrace more yin during pregnancy."

Lastly, after the 120th day into pregnancy, be very careful with lying on the back in savasana. Instead, try lying on your side in a supportive position like fetal pose and using bolsters or pillows. Stop immediately if you have any shortness of breath.

Setting Intention for Your Pregnancy

Intention is everything. Intention plants the seed of what you are trying to create within your practice, energy field and life. Same goes for pregnancy, intention is key. Let your intention be expressed in all aspects of your life, whether on the mat practicing or off the mat cooking what the Earth has birthed for you to eat.

“A woman’s intention can be as pure as she wants it to be, but even the best birthing plans go awry, they just do. So, whatever vibration you conduct and attract is what you will call forth with the pregnancy; the challenges, the child, the labor, etc. The woman will get exactly what she needs and [the pregnancy and child] will take her where her life path is meant to lead," says Kim.

(More on conducting your vibration in Good Vibrations: How to Achieve Higher Consciousness With Positive Vibes (Plus a Guided Meditation).)

Asana for a Clear Vessel

In yogic tradition, it is not until 120 days after conception that the soul is attracted into a mother’s body. Then the soul is fully embodied and inhabited in the mother. Prior to that 120-day mark, a woman is primed to get her vibration as clear for Atman as possible. Not only does asana prepare her for labor itself, but it allows her heart to open for trust through the entire process and a high frequency and centered intention for the pregnancy.”

Prenatal and perinatal psychology suggest that some of the deepest roots of human trauma are formed during pregnancy (prenatal) and during (or immediately after) childbirth (perinatal). During the prenatal process, the mother's experiences are imprinted onto the child intrauterine. Yoga is a tool to implement mental and emotional well-being of the mother, allowing a clear heart-centered vessel for a fetus to grow in, and a graceful, pleasurable birth.

To facilitate this idea, here are some asanas to open the hips to prepare your body for labor: malasana, half pigeon pose, frog pose, deer pose and straddle split. Warrior one and warrior two are great for strengthening your body for labor. Subtle inversions like downward-facing dog pose and dolphin pose give the bladder relief by moving the baby's head away from the pelvis during the last two trimesters. Finally, postures to help open the heart to Universal trust include camel pose and extended puppy pose.

Pranayama to Open, Trust and Allow

Breathing slowly and deeply will allow you to be connected more deeply with bodily sensations and control your thought processes. During pregnancy, practice nadi shodhana to balance the solar and lunar energies of the body and allow for relaxation of the nervous system. During labor, practice ujjayi (victorious breath) pranayama, which will allow you to get through fear blocks, contractions, stay centered and stay in control as much as possible while simultaneously allowing yourself to trust and open fully.

While pregnant, women tend to be primarily kapha dosha. Their blood volume increases by 50 percent as well as there is a high increase in water weight. Because the lotus flower grows from the mud, it is a beautiful symbol for the growing being inside of your watery womb. You can recite the mantra, Om Mani Padme Hum, to let the vibratory resonance make its way through your body and to your baby. Or, practice the lotus mudra to align your subtle energetic bodies. Draw the mudra above your crown as well as in front of your heart.

While practicing mantra and mudra or during labor, try a visual meditation. Envision a billowing 1,000-petaled lotus flower expanding from your crown chakra and undulating into space. As your baby is emerging from the womb, visualize the opening of your vagina as a lotus flower, revealing your baby's head.

(More on this popular mantra in The Meaning of Om Mani Padme Hum.)

"The act of giving birth is a downward motion, it is the opposite of the kundalini, physiologically. But during the labor process the crown chakra gets busted wide open and third eye is more open that it has ever been, all the while the force is downward, creating turmoil. Giving birth, no matter what form, forces you into your body and out of your head.”

Pregnancy and birth is the ultimate expression of embodiment. Stay true to your needs and listen to your body. You are a pure channel for divine light. 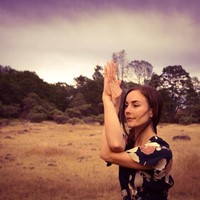 Inspired deeply by Tibetan Dream Yoga and kundalini energy, Jaya believes yoga to be the practice that allows her to become a clear vessel in which imagination flows, expressing itself as movement, poetry, melodies and words...and translates into the creative energy we know as shakti.

Experience the 5 Koshas Through Yoga Nidra
The Key Poses of the Ashtanga Primary Series
Why We Say Namaste
CBD for Your Muscles
Linking Breath and Mantra
Prenatal Yoga: What You Need to Know