There's Another Yoga World Out There and I Just Found It

Takeaway: Yoga Service is a different branch compared to mainstream yoga. One that is dedicated to using yoga to bring positive change to the world.

One of the classic yogic analogies for the universe is that of a spider’s web. Like a spider weaving its web entirely out of itself, consciousness creates the universe out of its own being. Likewise, the teaching tells us each of us also create, and then inhabit, the world of our own making.

The web of our Western yoga culture is intricate and continues to be woven anew all the time. One of the most exciting and inspiring evolutions is the emerging field of yoga service. This is the yoga of social justice, the yoga of accessibility, the yoga of diversity, the yoga of inclusivity. It takes the form of yoga and mindfulness programs at juvenile detention centers and prisons, veterans’ centers, schools, homeless shelters, yoga for the transgender community, and so much more. And, it’s quickly becoming an established presence in the mainstream yoga world.

Of course, the idea of service and yoga as service goes back to the beginnings of our tradition. “Strive constantly to serve the welfare of the world,” the Bhagavad Gita instructs us. Offering our actions for the benefit of all is a natural expression of gratitude for the gifts that yoga brings to our lives. As yogis, we do it for ourselves as much as anyone else. Everyone benefits when we choose to share the best of ourselves with others.

But the idea of sharing yoga, and deepening our own experience as a result of that sharing, takes on a whole new meaning in yoga service as a field. Bringing the teachings and practices to communities, who’ve been marginalized or excluded from accessing yoga in the traditional ways, also calls on us as teachers to do the inner work of confronting bias, examining our own limiting beliefs and assumptions, and coming to terms with the stories of injustice and trauma in our own histories. Furthermore, because they bring yoga out of its usual paradigm, service projects often require a lot more determination, perseverance and innovation on the part of the teacher than teaching yoga in conventional settings does. This is why I find work of the Yoga Service Council so vitally important to the continued success and expansion of yoga service.

How I Found it

I became familiar with the work of the Yoga Service Council as a result of my own volunteer-teaching initiative, The World Spine Care Yoga Project, which trains local people to teach yoga, breath work and mindfulness to spinal care patients in Botswana. In 2016, I attended their annual conference with the hopes of meeting other teachers like myself, who’ve expanded their offering beyond the typical studio and fitness models, and to learn from what they are doing. I found all this, and much more. Experiencing a thriving yoga service community bolstered my commitment to my project. The lectures and breakout sessions of conference gave me tools to address a specific challenge I was facing in raising funds for the continuation of our project, and made our work even more effective and sustainable.

The Yoga Service Council is a collaborative community dedicated to maximizing the effectiveness, sustainability, and impact of those working to make yoga and mindfulness equally accessible to all. As such, it’s become an important part of creating webs of connection and support for my service initiative and many others.

I was inspired to learn about the projects themselves, but perhaps even more so by the people doing them. These are dedicated yogis, who are often not even full-time instructors. They are lawyers, police officers, academics, as well as yoga teachers, who are quietly and consistently show up and do the invaluable work of bringing the tools of yoga and mindfulness to change lives. They are local leaders creating revolutions of greater consciousness, compassion, and purposeful living in their communities.

The networks of support and community building that are at the heart of the Yoga Service Council’s mission are critical for the success and sustainability of this work. Their yearly conference at the Omega Institute is dedicated to the important work of reclaiming the spirit of yoga as a path of service and expanding the networks of support for teachers doing this work so that it can thrive.

This is another yoga world that’s actually yoga in the world, where we need it most. It’s the new frontier of teaching and it’s filled with possibility and promise. If you’re already doing, or called to do this work, I would encourage you to mark your calendars for next year’s Yoga Service Conference for the tools, inspiration and community we all need to continue to serve, and share the gifts of yoga far and wide.

During These Times of Stress and Uncertainty Your Chakras May Be Blocked.

To help you bring attention to your chakras and to identify which of your chakras are causing you issues, we created the following quiz. 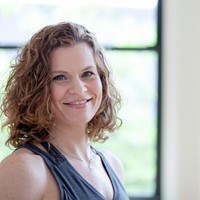 Barrie Risman is the best-selling author of Evolving Your Yoga: Ten Principles for Enlightened Practice and the proud creator of The Skillful Yogi, a thriving, online community of yoga teachers and continuing students from around the world.

Yoga for Everyone: The Top Organizations Making Yoga Accessible for Every Body
Six Signs You're Already More Yogi Than You Think
Journey to Love: An Essay on the Spiritual Community by Satyogi Shunyamurti
Peace and Unity: Paramahansa Yogananda's Wishes for the World
Yogapedia Interviews Deepak Chopra on Family, World Peace and Collective Consciousness
10 Most Fascinating Women in Yoga