The Meaning of Diwali

Takeaway: Diwali, also known as the festival of light, is the biggest event of the year for Hindu communities all over the world. For a practicing yogi, it is a time of intense meditation and reflection on some core values.

A five day festival, Diwali is the most significant event in the Indian calendar, and one of the biggest religious observances in the world. Known as “The Festival of Lights”, Diwali is celebrated by billions of Hindus everywhere.

Due to its deep spiritual symbolism, Diwali is an important and inspiring event in the life of every yogi.

This year, Diwali is celebrated starting on October 27th.

To be able to truly join and feel the celebration of Diwali, it is important to educate yourself about the stories behind the festivities and their philosophical and spiritual meaning.

Diwali: The Festival of Light

“Diwali” is a name derived from the Sanskrit phrase “a row of lights”. As its name implies, the prevalent symbol of the festival is light.

With an astonishing array of colorful lights, Hindus celebrate the victory of light over darkness, both literally and symbolically.

As the summer wanes, people rejoice in its fruits, and celebrate the strength and victory of light, fertility, and natural and spiritual wealth.

The festival is observed for five days every autumn, marking the end of the summer and the joys of a bountiful harvest.

Families mark the festival by wearing festive, elaborate clothing, decorating their homes with candles, ornamentary oil lamps, and creating intricate Rangoli designs with colorful powder on the hallway floors at the entrances to their houses. 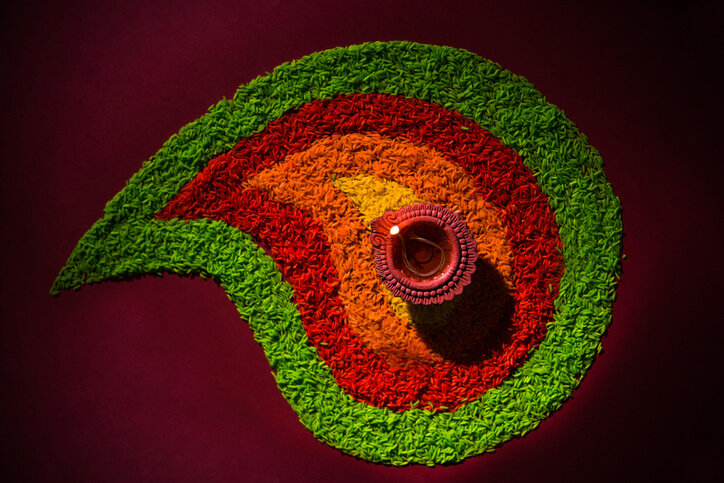 Gifts are exchanged, fireworks set the sky ablaze, and entire cities are lit up by glowing street decorations and fireworks.

The festival is observed by Hindu communities all over the world as the most important yearly event.

Read: Happy Diwali! This Festival of Lights Will Illuminate Your Fall.

The Story of Diwali: The Many Myths

Diwali has its origins as an ancient harvest festival, but while the message at the heart of the observance remains the same, there are various myths and origin stories explaining the festivities.

Diwali as the Return of Rama and Sita

Most Hindu communities celebrate Diwali as the festival that marks the return of Rama and Sita to Ayodhya after fourteen years. The great epic of Rama (an avatar of Vishnu) and his wife Sita (an incarnation of Lakshmi) is told in the Ramayana.

The Ramayana tells the story of Sita being abducted by the demon king Ravana, and Rama’s heroic efforts to save her.

It is from this tradition that the ritual of creating or decorating a path with candles and oil lamps stems from.

It is said that people of Ayodhya, overjoyed by the return of their King and Queen, lit their path through the night with wondrous ornamental lights that helped the divine couple find their way back home.

Read: 'Ramayana': The Indian Love Story of Rama and Sita 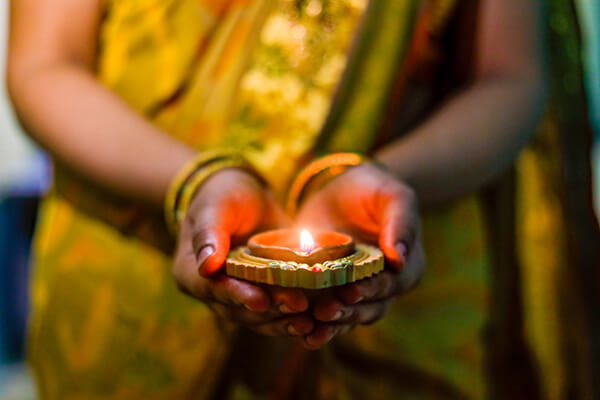 Diwali as Krishna the Freedom Bringer

In the south of India, Diwali is celebrated to mark another story - that of Lord Krishna’s heroic battles against the demon Narakasura, with goddess Kali by his side.

By defeating the demon, Krishna freed 16,000 girls from captivity and set the world free from evil.

Read: Lord Krishna: The Voice of the Bhagavad Gita

Diwali as the Celebration of Lakshmi

Some Hindu communities, most notably in Nepal, celebrate Diwali as a way to honor goddess Lakshmi.

Lakshmi is a supreme being, the wife and the shakti of Vishnu. 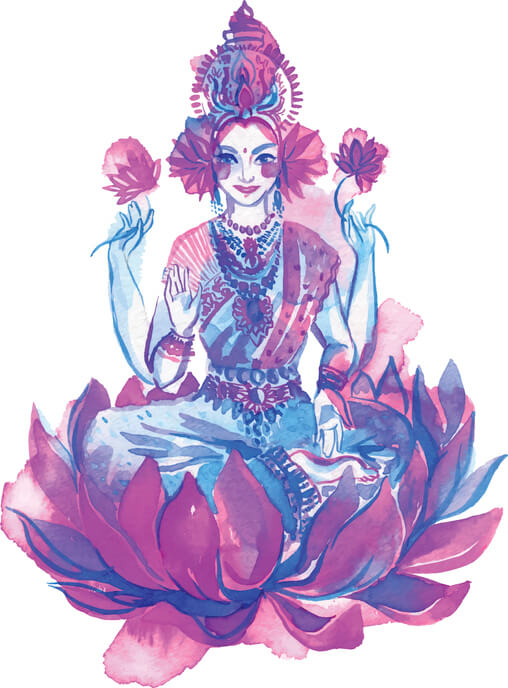 Lakshmi is celebrated as the goddess of prosperity, fertility, and wealth.

The traditions which dedicate Diwali to Lakshmi focus on the connection between Diwali, the harvest, and nature.

The Spiritual Value of Diwali

Whatever origin story of Diwali you choose to honor, the core message is the same - light beats darkness, good wins over evil, and prosperity and wealth are inner, spiritual and not material goods.

The myth of Rama and Sita teaches us that the ego, personified as a demon, brings nothing but harm to the mind, holding it captive.

Selfishness, pride, and greed corrupt and weaken the mind.

Spiritual awareness and devotion to that what is divine in nature, in others, and within ourselves is the only thing that can free our minds from the destructive clutches of the ego.

Read: How to See the Ego for What it Is

Lighting the corridors of our homes and setting the streets of cities ablaze with oil lights, lanterns and candles is a symbolic way for us to light our own paths.

Read: Light and Dark: The Spectrum of Human Experience

Celebrating the goddess Lakshmi is a celebration of both literal and metaphorical fertility. The harvest festival celebrates the fruits that the fertile land has given us, giving us sustenance and life.

The prosperity and wealth we talk about when we think of Lakshmi isn’t the kind of wealth we immediately think of in capitalist society - we’re not celebrating social status or money, we’re celebrating the wealth and abundance of nature, the ability of nature to create and sustain all life, including ours.

On a more metaphorical note, we’re celebrating our inner wealth and prosperity - Diwali is a time to focus on our emotional and mental strength, on the light which we have inside ourselves, and the power of our spirit.

The Beginning of the New Year

The ancient festival of Diwali marked the beginning of a new year. The time of the festival is considered a lucky time to start new projects or open businesses.

It is also a time to forgive the people who have wronged you in the past year and forget their transgressions.

At the same time, it is a time to forgive ourselves for our own shortcomings and failures.

Read: The Illusion of Perfection

Diwali is an important festival for all yogis. Devoted practitioners use the time of Diwali to reflect on the spiritual values of the festival, on the morals of the stories it was built on, and meditate on the ideas of light, fertility, prosperity, wealth, peace, and goodness.

Most yogis observe the five day festival by dedicating each day to a different aspect of the celebration.

The first day of Diwali is known as Dhanteras, meaning “wealth”. On this day, you may choose to meditate on the concept of natural and spiritual wealth, and redefine riches and prosperity as a spiritual concept rather than a material one.

The second day of Diwali is known as Narak Chaturdasi. Legend says that on this day Lord Krishna destroyed the demon Narakasaru, freeing the world from evil together with Kali. You may choose this day to meditate on the concepts of good and evil, light and darkness, both in the world around you as well as within yourself.

The third day of Diwali is Amavasaya, the new moon day, and the day dedicated to goddess Lakshmi. This is a great day to meditate on the goddess Lakshmi and tap into the shakti. 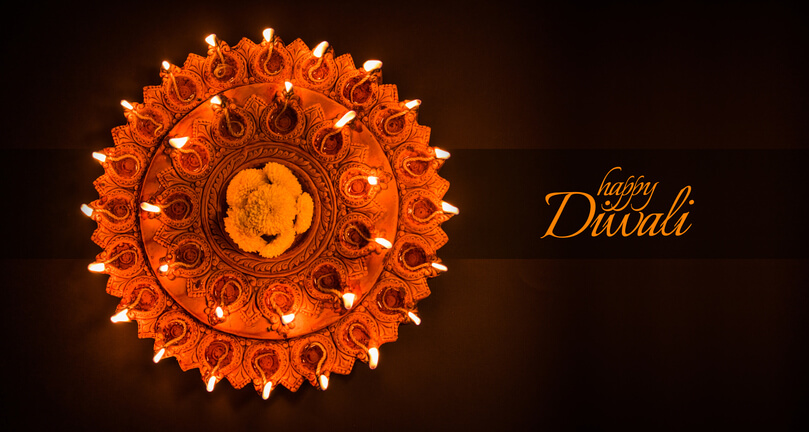 The fourth day is the day which celebrates Lord Krishna’s victory over Indra. Indra is the god of thunder and rain. On this day you may choose to meditate on the concept of danger and disaster.

Thunder and rain are natural phenomena which can be interpreted both as aggressive and disruptive, as well as as a blessing (without rain, draughts suck the life out of nature). Meditation on the idea of yin and yang, salvation and endangerment and how they might be intertwined brings peace and freedom.

The fifth day is known as Bhai Dui. This is a day that celebrates the unconditional and eternal love between siblings. On this day, you may choose to meditate on the concept of non-romantic love and family bonds.

Meditating on the concept of non-sexual love can help you feel connected to the world and other living creatures in it. The love being celebrated can be the love between actual siblings, but also between all people as we view our fellow humans as spiritual family.

However you choose to celebrate Diwali, use it as a time of reflection and celebration.

4 Steps to Making Your Shakti Shimmer
Shiva and Shakti: The Divine Energies Within Us All
5 Ways to Awaken Your Divine Feminine Shakti Energy
Four Facets of Hinduism's Lovable Lord Krishna to Keep in Mind
Abundance-Boosting Mantra & Meditation of Goddess Lakshmi
Hinduism's Most Popular Deities