I love sun salutations. They’re the perfect way to start the day. Moving, breathing, offering reverence to the sun and her unconditional light---sun salutations are one of yoga’s greatest gifts.

The movements never bore, they never tire; they’re steadfast and true. Sun salutations are my go-to morning ritual when I need to open my body.

They’re easy to memorize, so you can set them to music or do them in silence. They include variations, which make them fun to play around with, and they also have two very distinct aspects to them: sun salutation A and sun salutation B (also called Surya Namaskara A and B).

In this article, we’re going to explore the difference between sun salutation A and B, and how knowing the difference will help you to better understand yourself and your yoga practice.

A Cornerstone of Your Yoga Practice

First off, both sun salutations are cornerstones of many yoga routines. For this reason alone, you’ll want to know the difference.

Many vinyasa practices, and all ashtanga routines flow through both A and B sun salutations.

So, if you want to practice yoga on your own, without following a live instructor or class online, you need to know the difference between each flow. They’re different from one another in the asanas they embody, and the goals they fulfill.

We begin an Ashtanga yoga practice, and often a vinyasa one with sun salutation A. Also known as Surya Namaskara A, it contains the perfect set of poses to initiate a yoga practice.

Ancient yogis called the sun “surya.” This is its Sanskrit name. They revered the sun and perceived it to be the center of the Universe---the creator of all life---the heart of the world, physically and spiritually.

As a pathway to divine consciousness, the sun was the sacred heart of the Universe. As such, it needed to be honored at dawn. This is why yogis created sun salutes, and practiced them as the sun rose. Namaskara means “to bow,” and Surya means "the sun."

Thus, we bow to the sun when we practice both surya namaskara A and B. 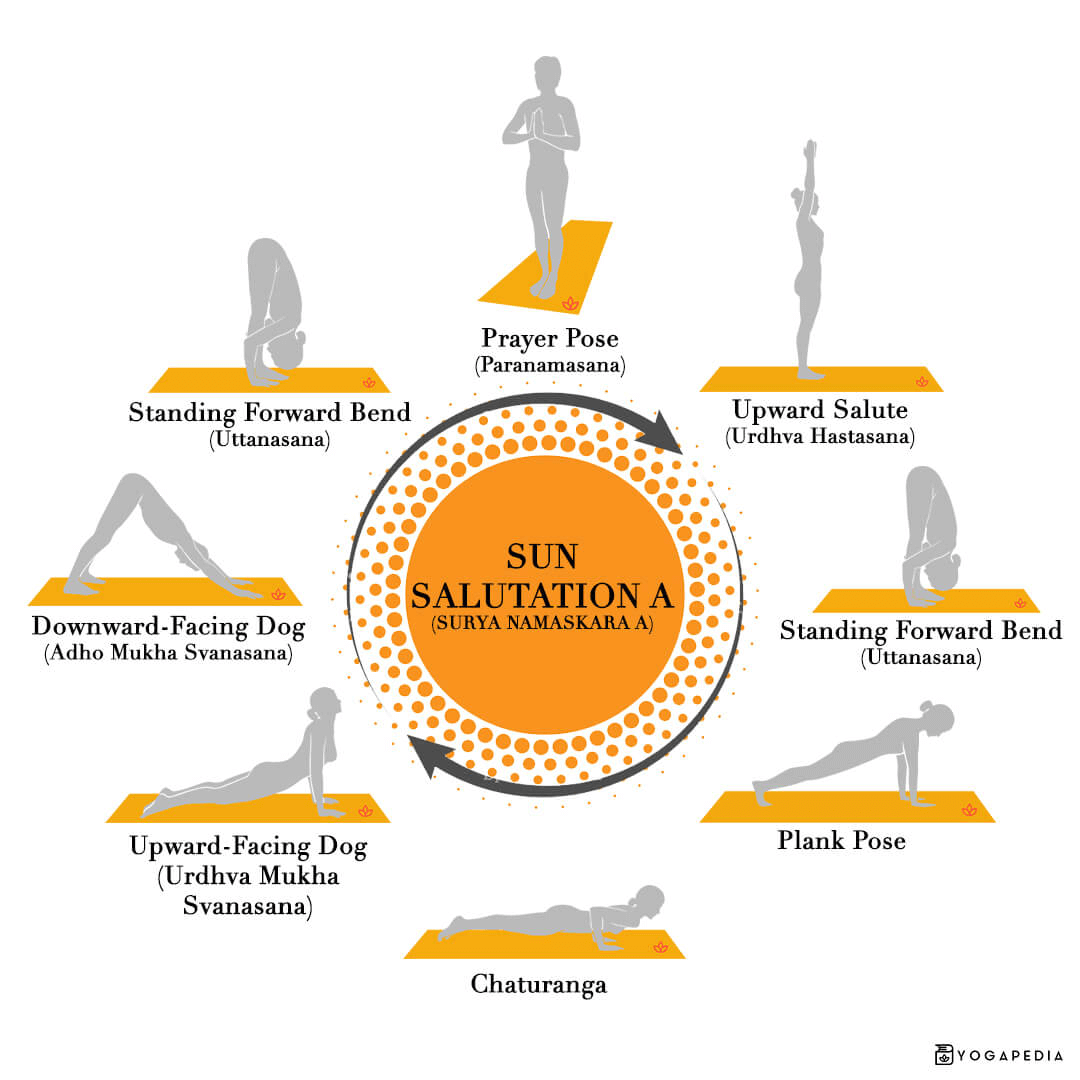 Sun salutation A begins with prayer pose. As you stand in prayer pose (pranamasana), your hands rest at the heart in prayer mudra. This has its own spiritual significance. The yogis believed it was our hearts that knew the truth of existence, rather than the head.

From prayer pose we raise our arms into an upward salute above our heads (urdhva hastasana), and then swan dive into standing forward bend (uttanasana).

From down-dog, we step forward into standing forward bend, rise up and back into our upward salute, and then back to mountain pose with our hands at heart center.

We can do sun salutation A as many times as we wish. Ten to twelve cycles of it works beautifully.

Sun salutation A is perfect for opening up our energy channels (nadis) each morning to get the energy (prana) flowing after a night of repose.

Sun salutation B is a bit more complicated, and more advanced. It should be done after sun salutation A. Sun salute B will fire up your quadriceps as it incorporates chair pose (utkatasana) as well as warrior I (virabhadrasana). It also contains all postures from sun salute A, with a few variations. 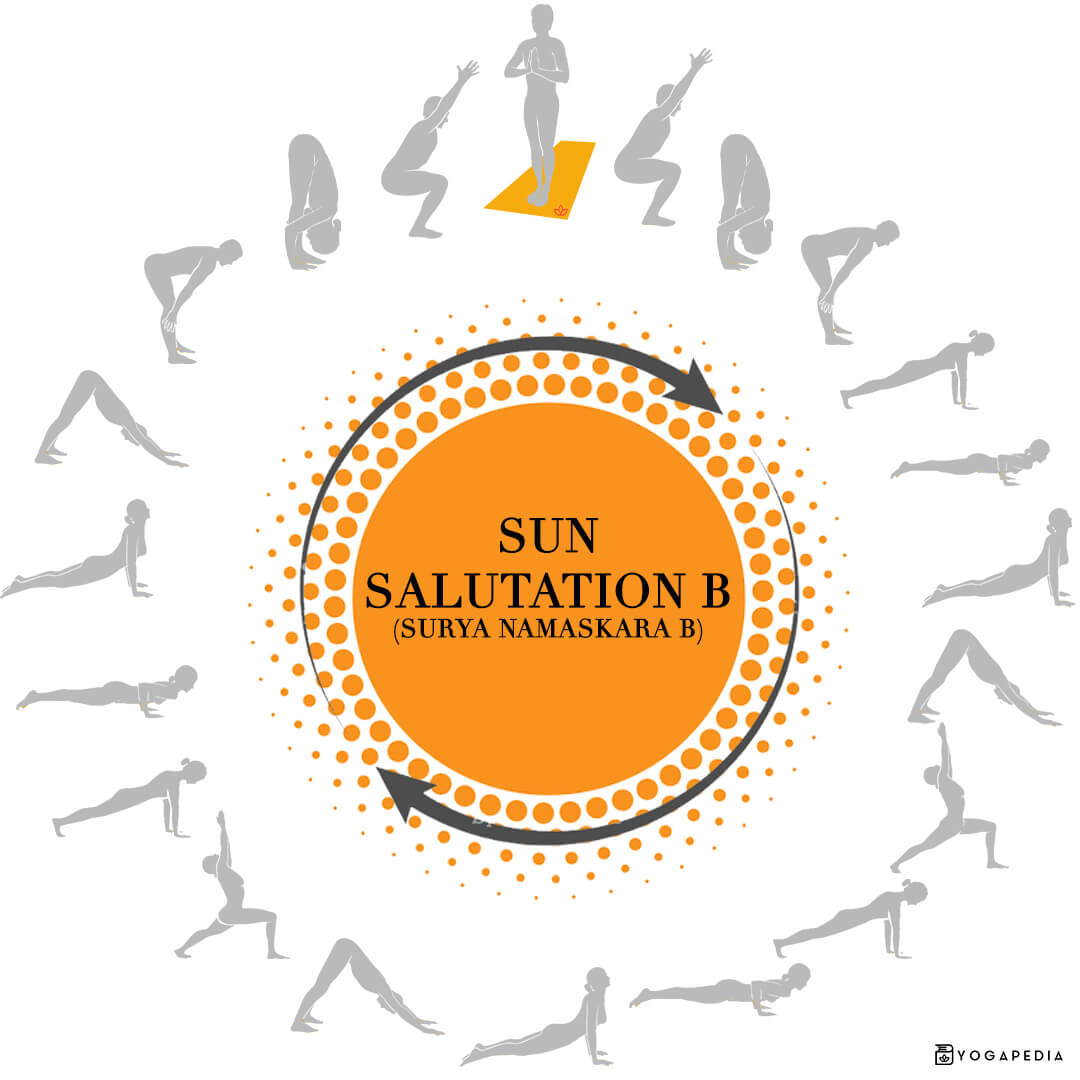 As you can see, the B form is more intense. It adds in two extra poses, and works more muscles, while also challenging the cardiovascular system, as it is more aerobic than the A form.

Both A and B are intricately linked to the breath. We inhale and exhale with each movement. Both are essentially breathing practices. And they were created by the ancient yogis intelligently---the sequence A must always come before sequence B.

Discover the Best Time of Day for Your Yoga Practice
5 Essential Asanas to Kickstart Your Mornings
Salute the Sun's Life-Giving Glory With This Surya Namaskara Series
Wake Up and Salute the Sun
Surya Namaskar: 12 Morning Asanas & Mantras
Morning Rituals for Yogis