Shiva and Shakti: The Divine Energies Within Us All

Both Shiva and Shakti are alive in both men and women. All of us have divine masculine (Shiva) aspects and divine feminine (Shakti) aspects to our being.

It’s said that our feminine side resides on our left side, while the masculine resides on our right side. We hold these energies within us and, when united, there’s a complete balance, joy and presence within our very being.

Accessing each of our divine natures — both masculine and feminine — can be both enlightening and surprising. However, we need to remember that we carry within us both aspects of the Divine.

Shiva is another name for the Absolute Reality, or Absolute Consciousness that makes up our cosmos. Shiva is the transcendent aspect of cosmic consciousness, or the Source of everything and all that is.

Shiva, in all his steadfast union between the internal world and the external world, is often known as the Lord of Yoga. The power of Shiva’s consciousness can bring great inner strength and spaciousness.

In the tradition of Shaivism, Shiva is forever in union with Shakti, his divinely feminine consort. The nature of Shiva energy is steadfast, stable, peaceful, strong and totally unmoved with complete presence.

Shiva represents the state of being unmoved by pain or suffering brought on by the external world. He is centered, grounded and compassionate. We can invoke his pure presence through meditation to call in the extraordinary qualities of Shiva into our own being.

Direction, purpose, freedom and awareness — these are our divinely masculine qualities. The masculine energy of Shiva is aware of everything that comes into creation.

All the things of creation are birthed through the feminine aspect of Shakti and all of us have these qualities within us as well. They are dance, movement, power, energy and the freedom to become.

Shiva is pure being in its stillness. Shakti is pure becoming in all her flow and creativity as well as her endless opening to possibility.

Your inner masculine side knows who he is and is purposeful in his knowing. There’s deep wisdom and capacity for awareness within Shiva.

Shakti is exquisitely beautiful with a flowing and shape-shifting quality to her — embracing reality as a dance. She is fluid, flowing and powerfully flexible.

Things that have already come into being are made of Shakti energy. These two divinely sacred energies are equal and opposite forces. We can’t have one without the other.

We can integrate Shiva and Shakti within our inner consciousness, within our entire being. These sacred powers can open us up and transform our very being.

The Shakti energy within us can take the form of prana, that life force energy that flows through our nadis, or subtle energy channels.

It can also take the form of kundalini energy, that coiled energy that lies dormant at the base of the spine until it is unleashed. When this happens, a kundalini awakening occurs, in which the Shakti energy awakens and moves through the central channel, or the sushumna nadi, along which the seven chakras reside. This is when deep cleansing, healing and transformation takes place — and it all happens through the movement of Shakti energy within.

We can feel our Shiva energy when we are the witness of the Shakti. When we sit in meditation, cultivating clear presence and purpose, we are resting within our inner Shiva nature. 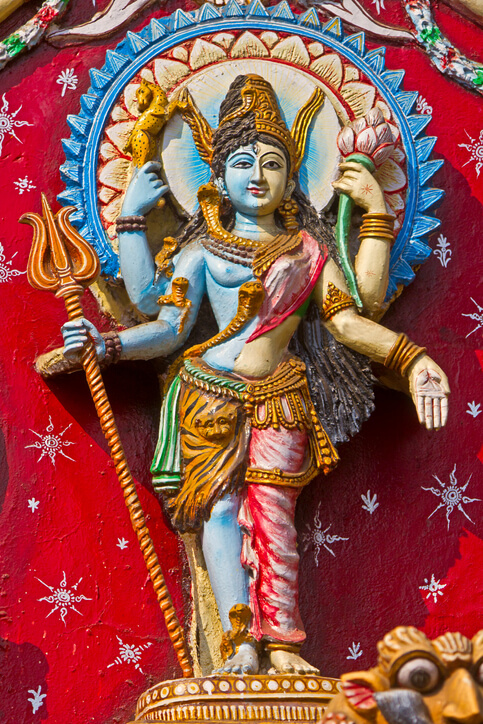 Shiva is the yogi god with his naked torso and muscled legs, with dreadlocks and a snake around his neck. He carries a trident and has a peaceful face.

Shakti has long hair, large almond shaped eyes and delicate features. She wears a flowing silk cloth and one of her feet is raised in a dance.

The image conveys complete balance, joy, and presence. This is Shiva-Shakti — the union of sacred masculine and feminine consciousness that lies within us and throughout the Cosmos.

4 Steps to Making Your Shakti Shimmer
The Meaning of Om Namah Shivaya
Shiva and Shakti: The Divine Energies Within Us All
5 Ways to Awaken Your Divine Feminine Shakti Energy
Wisdom of the Elements: Learn the Qualities of Life Through Mother Nature
Invoking the Divine Feminine in Yoga: How to Call Upon 5 Popular Hindu Goddesses