Osho: An Original Guru's Journey and Teachings Based in Love

Takeaway: Separating the drama from his teachings, Osho taught that we are truly our own gurus, that we are all divine beings of boundless love, creative expression and divinity.

I was first introduced to the mysterious, magnetic presence of Osho when I was 16 years old, before I had heard anything about free love, Rolls Royces, or rumors of scandal. For my birthday my mom gifted me the Osho Zen Tarot. Over the years, I began to use the deck as a tool for divination, insight and, later, as part of my daily meditation practice.

The cards were a sweet introduction to the wisdom of Osho, now one of my favorite spiritual teachers. As a somatic yoga therapist, Osho's work has certainly influenced my life and my practice. My teaching integrates classical yoga with authentic movement, the expression of emotions, and practices to awaken and direct the kundalini shakti (sexual life force energy) for personal transformation. My intention is to create a space in which clients and students are welcome to feel and express the full range of their experience through movement and meditation. Very Osho.

(Learn about 'Holding Space': What It Means for Yoga Teachers and You.)

With the recent release of the "Wild Wild Country" series on Netflix, which offers a dramatic look into Osho’s life and community, conversations are buzzing with talk of this controversial teacher. Let’s take a deeper look into who Osho was and how his work influenced the worldwide spiritual community today.

Chandra Mohan Jain was born December 11, 1931 in the heart of India. He is better known as Osho, or by some followers as Bhagwan, which is Hindi for "god" or "lord." Osho was the leader of the Rajneesh spiritual movement, which began in the 1960s and still lives on today.

The Rajneesh Movement in India

In the early days of the movement, Osho traveled throughout India on a speaking tour in which he openly critiqued the current social and religious climate there. He was widely known for his liberal and open attitude toward human sexuality, which put him on the map as a controversial teacher. In the mid-1970s, he established an ashram as well as a foundation in Pune, India, with the intention of creating a space for seekers from all over the world to come and transform their lives through his discourses, Tantric teachings and practices in community.

Those who became initiated into his community were known as sannyasins, or those who have renounced a life of material possessions. Each day at the ashram, he would give discourses in the morning and evening, with dynamic meditation going on throughout the day, as well as ample opportunity for sannyasins to connect with each other to explore meditation, sensuality and practice radical presence together.

(More on the importance of community and spiritual development in Journey to Love: An Essay on the Spiritual Community by Satyogi Shunyamurti.)

Rajneeshpuram Established in the U.S.

By the late 1970s, tensions between the Indian government and the Rajneesh movement had come to a head, and thus halted the development and expansion of the ashram in Pune. At this time, Osho and his close circle of confidants shifted their vision of creating a communal paradise from their home country of India to the U.S. In 1981, the Rajneeshpuram commune was founded in middle-of-nowhere rural Wasco County, Oregon. The commune exploded into a fully operational city, with followers flocking from all over to come and participate in this wild social experiment in living and loving radically.

Upon their arrival and somewhat aggressive expansion and take-over of the land, the Rajneeshis were met with resistance from the local community and government. To make a long and complex story short, there was a succession of legal battles and investigations of serious crimes committed by higher-up Rajneeshis that ended in the closing of the ashram and ultimately Osho’s deportation from the United States.

There are many questions surrounding this drama regarding who was orchestrating the illegal activity, how much Osho knew or didn’t know and much more. If you want to learn more about this, I highly recommend watching the documentary series and diving into your own research. It is a deeply compelling story that will shock and inspire you.

After his deportation from the U.S., Osho returned to Pune, India, where his ashram was still thriving. He lived and offered daily meditation talks there until he died at the ashram in 1990. Today, the ashram is known as the Osho International Meditation Resort, and people are still drawn from all over the world to this center for personal learning and transformation. It is undeniable that Osho’s teachings have had a significant impact on Western New Age discourse and thought, and have even become more widespread as time goes on.

Osho's Teachings to Deepen Your Practice

“Experience life in all possible ways —
good-bad, bitter-sweet, dark-light,
summer-winter. Experience all the dualities.
Don't be afraid of experience, because
the more experience you have, the more
mature you become.” ~ Osho

In Sanskrit, Tantra means "to weave" or "to expand." Osho’s Tantric philosophy — a synthesis of wisdom from mystical traditions such as Hinduism, Buddhism, Sufism, Taoism and Christianity — emphasizes that in order to know truth and bliss, one first has to allow each desire to be fully felt and honored as it arises. Through this honoring of our human experience, without suppression or denial, we can detach from ego-mind, rest in bliss and experience profound liberation.

While classical yoga asks us to become purified by avoiding what doesn’t serve our higher Self, Tantra, on the other hand, teaches that all experiences, both light and shadow, can be entry points to our true divine nature. By remaining unconditionally present and open to all emotions and sensations including (but not limited to!) anger, resistance, fear, lust, shame, sorrow, we widen our capacity to be with what is and to love ourselves unconditionally.

(To help get you started, here are Self-Love Practices to Teach Yourself How to Love You.)

One of the key practices from Osho’s teachings is his Dynamic Meditation. This practice is designed to free up and move stagnant energy from the body and release old conditioning and trauma. The hour-long meditation is divided into five segments:

Practicing Dynamic Meditation or something similar can help yogis shake up their practice and open their flow of energy.

In my process of writing about Osho, I debated how much to dive into the controversy and drama that is now unfolding with the release of documentaries and films about him and his life. Any time a guru is treated like a god, unbalanced group power dynamics often unfold. Thus, it can be helpful to separate the teachings from the controversy around the guru.

I hope that with the spotlight on Osho once again, that more light may be shed on the beauty and wisdom of the teachings themselves. After all, that was a huge piece of what Osho taught: that we are truly our own gurus, that we are all divine beings of boundless love, creative expression and divinity.

(Read on in Seeking Your Guru: A History of Gurus in the West + 6 Bits of Advice for the Seeker.) 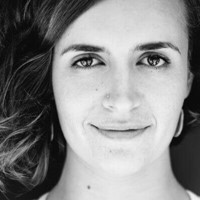 Lucia Grace is a Yoga Therapist, yoga instructor and dancer. Also a lover of movement and healing arts, she is based in the San Francisco Bay area.