Lord Krishna: The Voice of the Bhagavad Gita

Takeaway: Lord Krishna is a Supreme God and one of the most important figures in Hindu mythology. Teaching us to celebrate life, love, and knowledge, Krishna is a significant figure for all yoga practitioners as he is the one that first mentions and defines yoga in the ancient texts.

Lord Krishna is a Supreme God in the Hindu tradition, a well known hero of Hindu mythology and a favorite among deities. The story and teachings of Lord Krishna have had great impact on Hindu philosophy, art and culture, and to this day Krishna is popular among devoted Hindus and yoga-enthusiasts alike.

Krishna is the eighth incarnation of Vishnu, the head of the Hindu Trinity of Deities, and debatably the most powerful god in Hinduism. (Learn more in Hinduism's Lord Vishnu: Preserver and Sustainer of the Universe.)

Lord Krishna is interesting for all those who practice yoga because it is Krishna, in fact, who is first recorded to have mentioned and defined the concept of yoga!

Read on to find out more about Krishna’s story, Krishna’s philosophy, and his relevance to yoga practice!

The Beginning of Krishna’s Story

Krishna is believed to have lived on earth in the period between 3200 and 3100 BC. He was born at midnight on the Ashtami – the eighth day of the Krishna paksha.

The great Lord Vishnu pulled two hairs from his head, one white and one black, and planted the black hair into the womb of princess Devaki of the Pandava family – and that is how Krishna was conceived.

Devaki and her husband King Vasudeva were royals, and the rulers of Mathura.

As the story goes, Kansa, Devaki’s brother, wanted to become king of Mathura. He took over the kingdom by force, imprisoning the Pandava family. He was known as a cruel and hated ruler.

A prophecy was told that Kansa was going to be killed by Devaki’s eighth child, and in fear of losing his power, Kansa murdered all the children Devaki gave birth to.

While Devaki was pregnant with Krishna, Lord Vishnu appeared to her and told her of her brother’s plans, which is why Krishna was sent away into hiding as soon as he was born. He was taken to the village of Vrindavana where he was brought up as a simple peasant boy tending to cows. 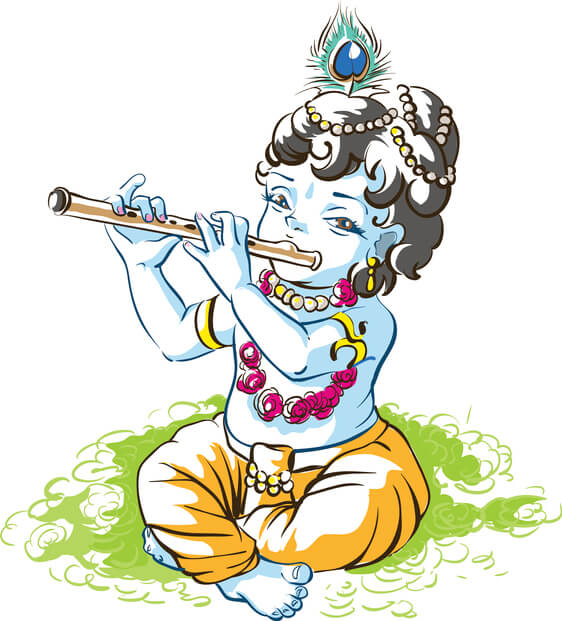 Krishna had a happy and simple childhood in an idyllic pastoral setting.

Krishna is said to have been a very charming and popular young man, known as a talented musician and dancer. Witty and flirtatious, as a young man Krishna captured the hearts of many women. Krishna seduced the women of the village by playing the flute, the melody of the music luring local women, married and unmarried alike, out of their homes during the night to dance in the moonlight.

It is said that no one could resist Krishna’s charms, and that he was a skilled and generous lover.

This aspect of Krishna’s personality is the reason why he is revered as the Lord of love, passion, and celebration. Praising Krishna serves as a reminder that we should celebrate and enjoy love.

As he was growing up, Krishna became known for more than his good looks, skills as a lover and vivid personality. He became a great and clever adventurer, outwitting and slaying numerous enemies, mortal and demonic alike.

Eventually, Krishna returned to his true home of Mathura. Krishna took revenge on Kansa, murdering him, liberating the land and his biological family, and taking over the throne. 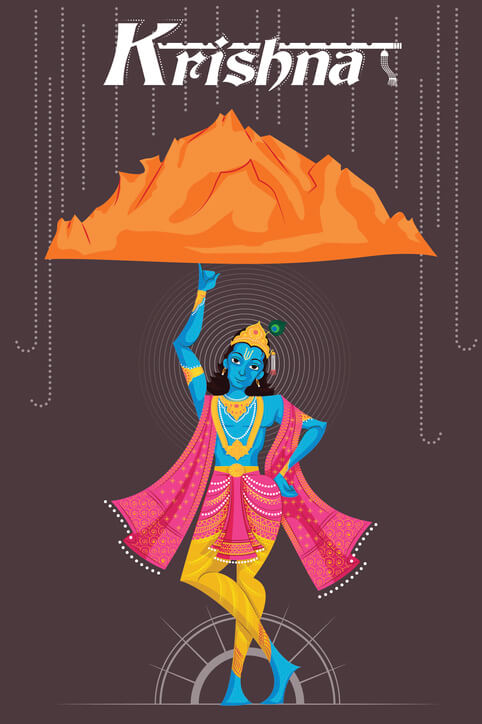 Krishna’s return was welcomed and celebrated by the people, and he was seen as a savior.

Krishna became a just and wise leader. While living in Mathura as an adult, Krishna sought out to complete an education. He mastered the 64 sciences and arts in 64 days. As payment for his education, Krishna resurrected his tutor’s dead son.

The fact he was a benevolent, just, and wise ruler is what makes Krishna a symbol for education and wisdom. (Learn more in Four Facets of Hinduism's Lovable Lord Krishna to Keep in Mind.)

Krishna Janmashtami is one of the biggest Hindu Festivals and it is in honor of Krishna’s birthday. It is also the central holiday for those who worship Krishna.

Janmashtami is celebrated on the eighth day of the dark fortnight in the month of Bhadrapad. In our modern day calendar, this makes the date shift, being either in August or September – depending on the year.

Krishna is seen as the bringer of joy, light, and knowledge.

He is viewed as the embodiment of conscious living and is a symbol for celebrating life – which is exactly what his honorary birthday festivities are about. 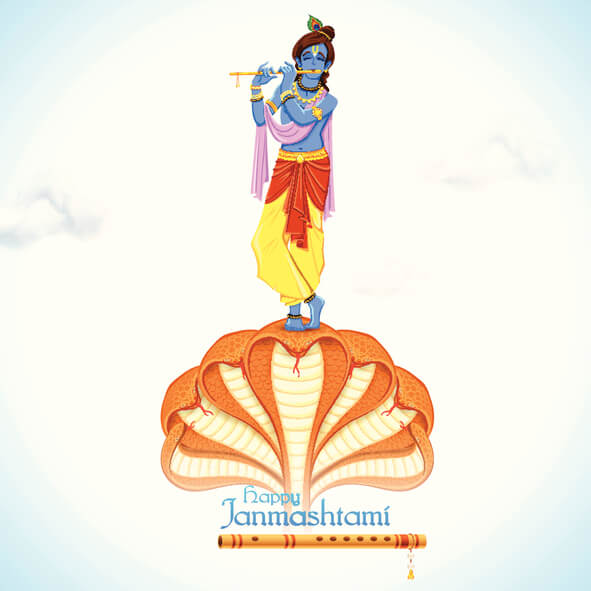 The festivities are joyous, colorful, and take place all over India and the Hindu world. Krishna is celebrated through devotional songs, dances, Pujas and Aarti. (Learn more in Performing Puja: A 'How-To' on Creating Your Own Spiritual Ritual.)

The observation of the festival starts before dawn and continues until midnight, the entire day being about celebrating Krishna and life.

Representations of Krishna – Krishna in Art

In art, Krishna is depicted as having dark, bluish skin and long, thick, coal-black hair. Typically, he’s represented wearing a yellow robe and a decorative peacock feather in his hair, playing the flute.

As a nod to his pastoral upbringing, he is often shown surrounded by cows.

A lot of art devoted to Krishna depicts him carrying the cakra discus Vajranabha and the club Kaumodaki. 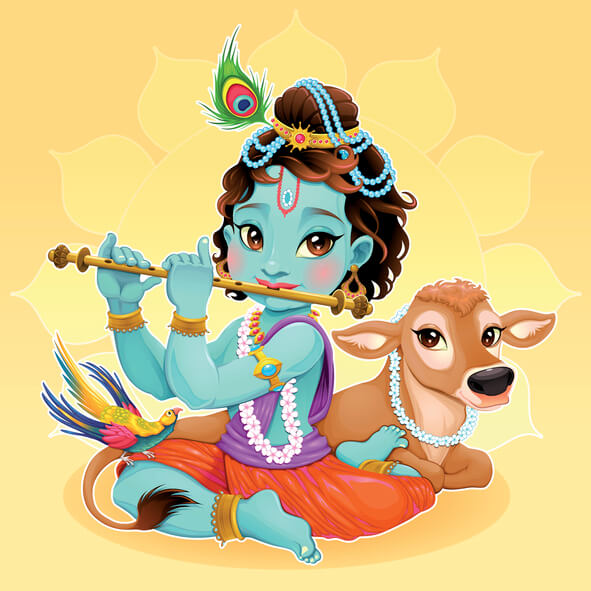 This double quality which goes both ways is at the essence of his teaching.

Krishna teaches us that the Self is separate from the body, with this self he speaks of being what we would refer to as the soul.

It is this self which only uses the body as a vehicle that is one with the universe, making us spiritual beings first and foremost, and then material and physical beings.

Just like Krishna, we all exist in two worlds at once – the physical and the spiritual one.

Krishna’s main message is that of celebrating the universe and celebrating ourselves by doing so. Living an enlightened life with the awareness of our true selves, participating actively in our own lives, celebrating life, love, and knowledge is the way we celebrate all life and not just our own.

As we are both spiritual and physical beings, just like Krishna, we are to enjoy both the spiritual world and the material world – we are to be devoted spiritualists, intellectuals, lovers, and enjoy both our minds and our bodies, all the while aiming to be kind and loving towards others. 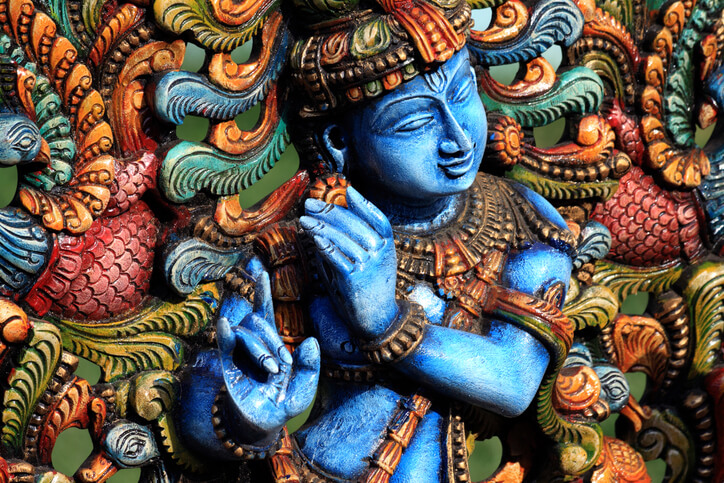 The word “yoga” appears for the first time in the Bhagavad Gita – a main yoga text – as spoken by Krishna.

Krishna offers yoga as a solution to Arjuna, who is having trouble overcoming a feeling of disassociation and the inability to fully, consciously and actively participate in his life.

Yoga is a far more complex concept than the bodily postures that we practice today.

Contrary to popular belief, yoga did not start out as a physical experience, but rather as a holistic one – which Krishna explains at length in the ancient Sanskrit texts of Bhagavad Gita.

Yoga is a conscious way of living: yoga is the heightened awareness of all life around us and within us, of our being in the world, which leads to a life lived purposefully instead of automatically.

To practice yoga, according to Krishna, means to be driven by a pure force, living life fearlessly and freely, forming a powerful and intimate connection with the universe.

Because of his big role in the creation of the concept of yoga and all the traditions of yoga that followed, Krishna is a key figure of Hindu mythology for all those who aim to lead a spiritual life as yoga practitioners.

Four Facets of Hinduism's Lovable Lord Krishna to Keep in Mind
Hinduism's Lord Vishnu: Preserver and Sustainer of the Universe
Krishnamacharya: The History and Teachings of the 'Father of Modern Yoga'
5 'O Arjuna' Quotes From the Bhagavad Gita for You and Your Yoga Practice
A Guide to Hinduism's Leading Goddesses
Hinduism's Most Popular Deities