Ardha salamba sirsasana is an intermediate supported inversion that prepares the yogi for the full version of sirsasana, or headstand. From Sanskrit, ardha means “half”; salamba means “supported”; sirsa means “head”; and asana means “posture” or “pose.”

Ardha salamba sirsasana is also known in English as half supported headstand. 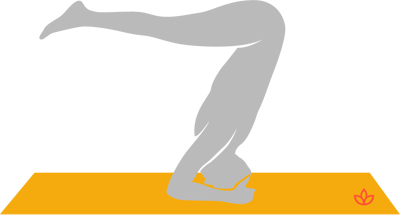 Ardha salamba sirsasana offers most of the same benefits as the full version of sirsasana. The sahasrara (crown) chakra – the energy center of intuition, enlightenment, higher knowledge and inspiration – is believed to be activated through practice of this pose. Opening this chakra is associated with reliability, selflessness, spirituality and stability. Ultimately, an open sahasrara chakra leads to the path of self-realization.

As an inversion, ardha salamba sirsasana also is believed to:

This posture may also be practiced with the palms pressing into the mat and the elbows at a 90-degree angle. In this version of the pose, the knees rest on the back of the upper arms.

Quit Tripping: 3 Steps to Keeping Your Balance on the Yoga Mat
6 Tips for Better Balance in Your Yoga Asana Practice
4 True Purposes for Why We Practice Yoga Asana
How to Prep For Inversions
4 Yoga Poses for a Strong Back
How to Safely Practice Headstand