As such, recitation of this mantra can be used to enhance spiritual devotion, deepen a sense of connection with the divine and cultivate wisdom and knowledge of the true self.

As a combination of bija mantras, Om Aim Hreem Shreem is a particularly powerful mantra. Each of the seed sounds are believed to have a unique vibrational energy which resonates throughout all layers of the physical and subtle body. Although there is no direct translation, one interpretation is: “Oh merciful Lord. Please bestow wealth, health and prosperity. I seek asylum from you.” 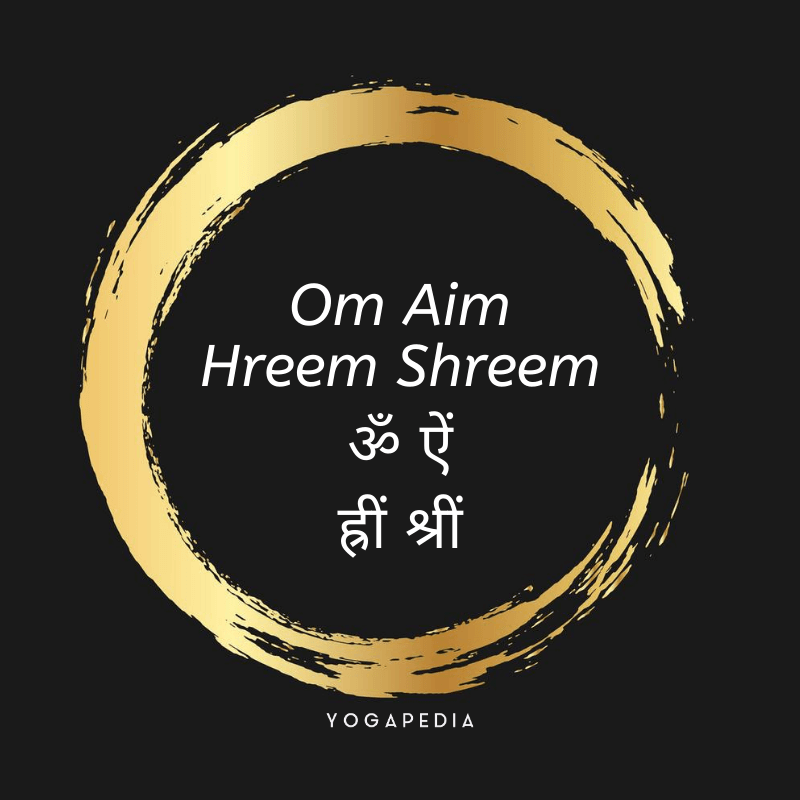 Mantras are used across religious and spiritual traditions as a meditative “tool of thought,” helping to prepare the practitioner for deeper states of meditation and to enter higher levels of consciousness.

In general, mantras are made up of sacred words or short phrases, whereas bija mantras consist of single-syllable sounds.

These bija sounds tend to have no specific meaning, but are chanted for the transformative power of their sound vibrations and symbolic significance. Otherwise known as ‘cosmic vibrations’, the sounds are believed to enhance and improve the flow of prana (life-force energy) throughout the subtle body.

The significance of each syllable in the Om Aim Hreem Shreem mantra is as follows:

Om Aim Hreem Shreem should be recited with undivided attention in order to receive maximum benefits. It can be practiced in any stable seated posture, and mudras such as Gyan mudra or Dhyana mudra can help to improve concentration and encourage greater insight.

Music and Mantra
Advancing With Mantras
Abundance-Boosting Mantra & Meditation of Goddess Lakshmi
The Makings of a Japa Mantra and How to Add This Yogic Practice to Your Sadhana
What Makes a Mantra?
5 Benefits of Chanting OM