To enter this posture, begin in crane pose. From a squatting position, place the hands on the ground shoulder-distance apart. Lift the hips, placing the knees against the upper arms. Carefully shift the weight to the hands as the feet lift off the ground and the elbows straighten. From crane pose, extend one leg straight back to complete one-legged crane pose.

The posture is also known by its Sanskrit name, eka pada bakasana. 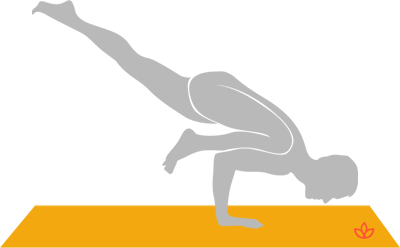 One-legged crow pose is often used to describe this posture, but when a distinction between the postures is made, the crow pose variations are performed with bent arms while the crane versions are with straight arms.

Because one-legged crane pose is an advanced posture that requires strength and balance, it should only be attempted after mastering crane pose. Meeting the challenge of the one-legged variation, though, has its benefits, including stabilization of the nervous system and creating a sense of grounding. The asana strengthens the arms, wrists, back and abdominal muscles while building balance and coordination. It also opens the groin, boosts confidence and encourages mindfulness.

To ease into the pose, a booster such as a yoga block may be used under the feet.

The 5 Virtues of a Good Yoga Teacher
Not All Asana: The Eight Limbs of Yoga and What They Mean for Your Practice
Experience the 5 Koshas Through Yoga Nidra
The Key Poses of the Ashtanga Primary Series
Why We Say Namaste
CBD for Your Muscles