To enter the pose begin standing in tadasana, big toes touching and heels slightly apart. Drop the hips as if sitting on a chair, careful to keep the knees aligned behind the toes. Bring the hands into prayer position in front of the heart. Twisting from the core bring the left elbow on the outside of the right knee, turning the chest to the right. Spread the arms into a “T” with the left fingers touching the ground and the upper arm above the shoulder. From this position, thread the left arm between the thighs while the right arm reaches around the low back to grasp the left wrist. Interlace the fingers and bring the drishti toward the sky. Hold for a cycle of four to six breaths then mindfully release the clasp and come out of the pose. Repeat on the opposite side. 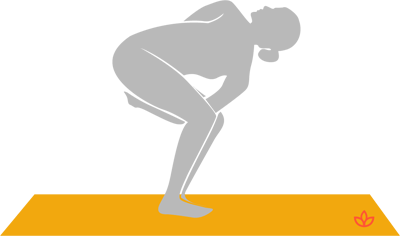 Parivrtta baddha utkatasana is a challenging pose and, because it intensely engages the whole body, has many health benefits, including:

Suggested preparatory poses include garudasana (eagle pose), utkatasana (chair pose), pasasana (noose pose) and parivrtta utkatasana (revolved chair pose). Those with neck pain can keep the drishti forward rather than to the sky.

Invite More Love Into Your Life With These 5 Heart-Opening Asanas
5 Best Yoga Poses for the Workaholic
Different Yoga for Different Days: A Quick Overview of 5 Popular Styles
Ahimsa: The Number One Yama of the First Limb of Yoga
Top 4 Yoga Poses to Keep You Energized and Feeling Great
Experience the 5 Koshas Through Yoga Nidra