According to the Tantric tradition, the Rishi (seer or sage) who originated this mantra is Prajapati, but in the Puranic Tradition the Rishi is Narada. Regardless of this difference, both traditions agree that Om Namo Bhagavate Vasudevay is the supreme Vishnu mantra.

Found in the ancient Hindu text, Vishnu Purana, Om Namo Bhagavate Vasudevay can be translated as “I bow to Lord Vasudeva (Lord Krishna)”. However, this mantra is recited as much for the benefits of the sacred sound vibrations as for any specific meaning.

This mantra is understood to be a moksha or mukti (liberation) mantra, recited as a way to achieve spiritual freedom from samsara, or the recurring cycle of death and reincarnation. 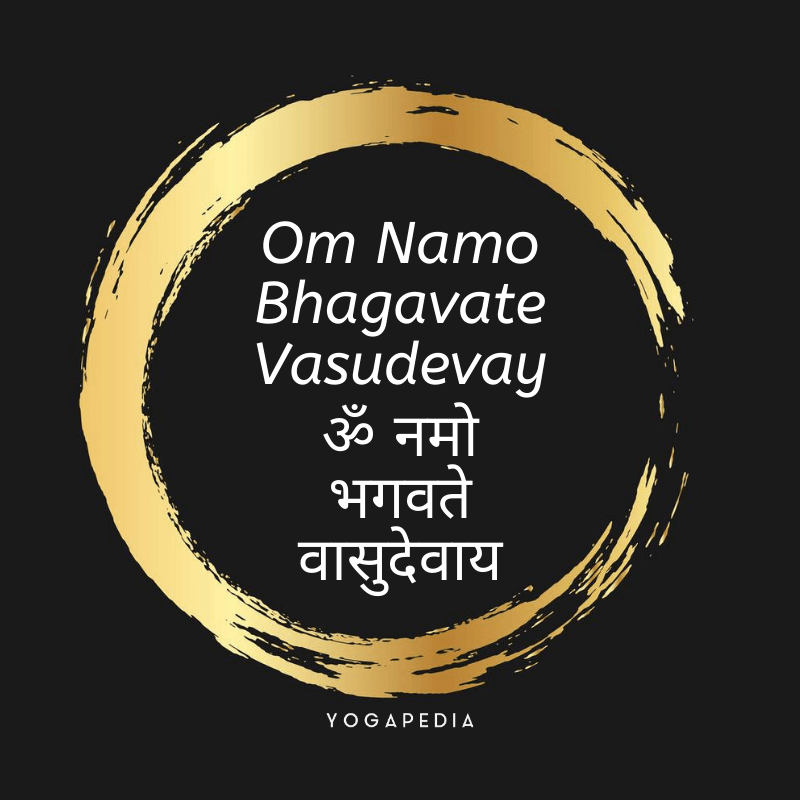 Due to the nature and multiple meanings of Sanskrit words, translations of Om Namo Bhagavate Vasudevay vary, but all indicate praise for the supreme god. It is considered a maha or ‘great’ mantra.

In addition to its use in Vaishnavism, Om Namo Bhagavate Vasudevay is popular in the Kripalu tradition. Some Kripalu practitioners interpret the meaning as “I bow down to the divine light within,” thereby using the mantra as a means of self-realization.

Om is the primordial and sacred sound vibration of the universe, believed to encompass universal energy. Namo can be translated as “to bow to” or “to pay homage to,” and is often used as a salutation representing spiritual surrender. Bhagavate refers to one who is divine, blessed or considered to be Godlike. Vasudevay can either refer to Krishna, the god (devaya) of light (vasu), or the infinite and formless universal energy of Brahman. As such, the most common understanding of this mantra is a reverent salutation to Vishnu as Krishna.

It is believed that if devotees recite Om Namo Bhagavate Vasudevaya daily, Krishna will stand by them and respond to the calls of their hearts immediately. Krishna is said to dwell within all beings, and reciting this mantra is therefore a means of attaining awareness of the Krishna consciousness within.

Om Namo Bhagavate Vasudevaya can be used in a meditative repetition known as japa, in which the mantra should be recited for at least 15 minutes and followed by silent meditation for maximum benefit.