Definition - What does Shiva Twist mean?

Shiva twist is a simple standing yoga pose that requires basic balance. The pose is named for the Hindu god, Shiva, who is also known as the Lord of the Dance.

To practice Shiva twist, begin in mountain pose with hands on hips. Bend the right knee, lifting it slowly. Spread your arms out to the sides with the elbows bent and the palms facing forward. On an exhale, twist the torso to the right, stretching the left elbow toward the right knee. Repeat on the other side. 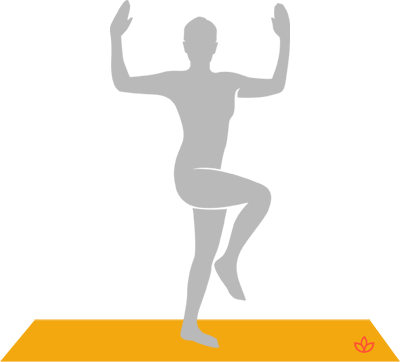 Shiva twist is a good warmup for more challenging balancing poses. In addition to improving balance, this pose also has a wide range of mental and physical benefits, including:

For yogis having difficulty with balance, keep the torso facing forward or practice the pose next to a wall for support.

Shiva and Shakti: The Divine Energies Within Us All
Experience the 5 Koshas Through Yoga Nidra
The Key Poses of the Ashtanga Primary Series
Why We Say Namaste
CBD for Your Muscles
Linking Breath and Mantra