Definition - What does Revolved Side Angle Pose mean?

Revolved side angle pose is a standing, side-stretching yoga posture that requires balance and flexibility. It offers a wide range of physical benefits as it stretches and strengthens various parts of the body.

To enter this asana, the practitioner assumes a lunge position. The back arm rests on the lead leg or reaches to the ground. The lead arm extends overhead, creating a twist in the core.

This pose may be referred to by various other names including twisted side angle, rotated side angle, and side angle twist pose. It may also be called by its Sanskrit name, parivrtta parsvakonasana. 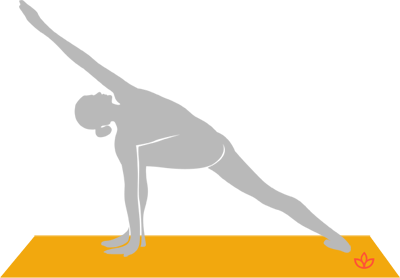 Because of the twist in the core, revolved side angle pose is believed to stimulate the abdominal organs, thereby improving digestion. This pose is also thought to relieve low backache, sciatica, osteoporosis and breathing problems.

Revolved side angle pose may also:

Those with neck pain or a neck injury should avoid turning the head in this pose; instead, the gaze should be straight ahead with the side of the neck evenly extended.

Top 10 Mudras for Your Yoga Practice

4 Steps to Making Your Shakti Shimmer

Discover the Best Time of Day for Your Yoga Practice

The Practice of Shatkarma in the 21st Century