Gate gate para gate para sam gate bodhi swaha (Sanskrit: गते गते पार गते पार संगते बोधि स्वाहा) is a Buddhist mantra that is found at the end of the Heart Sutra, often cited as the best-known Buddhist scripture and included in the Prajnaparamita (“Perfection of Wisdom”) section of the Mahayana Buddhist canon. It is also known as the Heart Calming Mantra.

There are a couple translations, but they share the same general focus. This mantra can be translated as “Gone, gone, gone to the other shore beyond. O what an awakening, all hail!”. A shorter, more concise translation is: “gone beyond the beyond to enlightenment”. Another perspective on this mantra is, “Gone, gone, gone all the way over, everyone gone to the other shore, enlightenment, hail!" 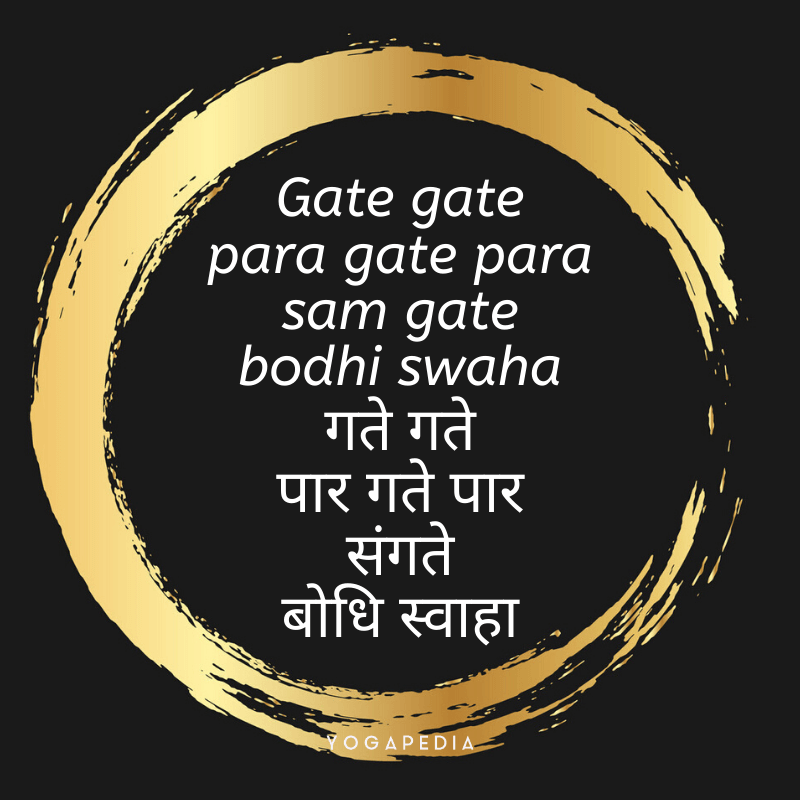 Each word in gate gate para gate para sam gate bodhi swaha has it's own significance. The breakdown of each word is as followed:

This prayer appears at the end of The Heart Sutra is a teaching by Chenrezig, who is also known as Bodhisattva Avalokitesvara, the Buddha of Compassion.

This sutra is chanted frequently by followers of Buddhism at meetings and daily meditation practice. Although The Heart Sutra is very brief it contains fundamental concepts of Buddhist Philosophy. These include the four noble truths, the skandhas, the central concept of Mahayana Buddhism, Emptiness and the cycle of interdependence.

This particular mantra is powerful and poetic in its ushering in an experience of enlightenment and the encouragement to let it all go. Its repetitive nature is meditative and calming, and yet it is also deferential to the divine in oneself as seen in the final word, swaha. Swaha is traditionally said at the end of making an oblation to God(s). This mantra speaks to life’s impermanence and the acceptance of that truth.

This mantra can be meditated upon, chanted or sung. It is beautiful and contains its own rhythms. It is distinctly Buddhist in nature, but still holds true to being an authentic Sanskrit mantra.

Music and Mantra
Advancing With Mantras
Integrating Feelings of the Heart
Heart Intelligence: How to Live From Your 'Real' Brain
A Heart-Opening Visualization Meditation
What Makes a Mantra?