Standing separate-leg stretching pose is a basic partial inversion that boosts circulation to the brain while increasing flexibility. It is the ninth posture in the Bikram yoga sequence of 26 asanas. It is also known by its Sanskrit name, dandayamana bibhaktapada paschimotthanasana.

Beginning in a basic standing position, the feet are stepped apart in a wide angle. The upper body then folds at the waist as the crown of the head drops toward the ground. The hands reach around the outside of each leg and grasp the heels, then rest the heels on all five fingers of each hand. 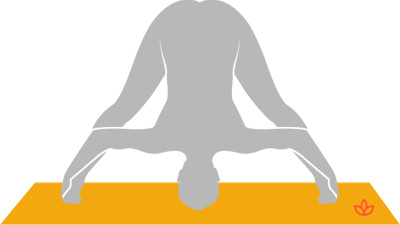 For a less intense stretch, the hands can grasp the outside of the feet with all of the fingers.

10 Benefits of Inversions
Beginner's Guide to Bikram Yoga: From Its Short History to Sequence of 26 Parching Postures
How to Prep For Inversions
Experience the 5 Koshas Through Yoga Nidra
The Key Poses of the Ashtanga Primary Series
Why We Say Namaste