Definition - What does Urdhva Vrksasana mean?

Urdhva vrksasana is one of the Sanskrit names given to an asana in which the practitioner stands in tadasana with their arms reaching over their head and the palms together. The drishti is to the thumbs.

The name can be translated as from Sanskrit as urdhva meaning “upwards”, “vrksa meaning “tree” and asana meaning “posture” or “seat”. Thus its full name means “upward tree pose,” but in English it is also often referred to as raised arms pose. 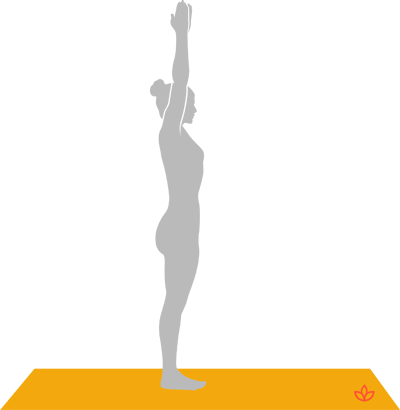 Urdhva vrksasana provides an intense upwards stretch, which is associated with many physical and mental benefits. It is thought to:

On a subtle energetic level, urdhva vrksasana is considered beneficial for controlling kapha, due to its stimulating nature.

Urdhva vrksasana is practiced twice in the Surya Namaskar series of Ashtanga Yoga. As part of this series, the posture is considered beneficial for facilitating proper breathing technique and warming the body for the rest of the postures to come in the sequence.

Urdhva vrksasana is also sometimes used as a Sanskrit term for handstand pose.

How to Eat for Your Dosha Type
Wake Up and Salute the Sun
Salute the Sun's Life-Giving Glory With This Surya Namaskara Series
Sun Salutation A Versus Sun Salutation B: The Difference You Should Know
6 Parts of the Yoga Lifestyle You Might be Overlooking
Experience the 5 Koshas Through Yoga Nidra