Om Dum Durgayei Namaha (Sanskrit: ॐ दुं दुर्गायै नमः) is a Sanskrit mantra, honoring the powerful Hindu goddess, Durga. Since Durga is believed to remove suffering and protect Hindus from harm, this mantra is recited as a form of divine protection.

Recitation of Om Dum Durgayei Namaha with devotion, humility and a sense of surrender to divine powers is a means of receiving Durga’s blessings. This can help to clear obstacles in relation to health, finance and success, bestowing devotees with wisdom, well-being and prosperity.

Mantras are used across religious and spiritual traditions as a meditative “tool of thought,” helping to prepare the practitioner for deeper states of meditation and higher levels of consciousness.

Om Dum Durgayei Namaha may be repeated silently as a form of meditation, or chanted aloud in order to harness the energy of the sound vibrations. 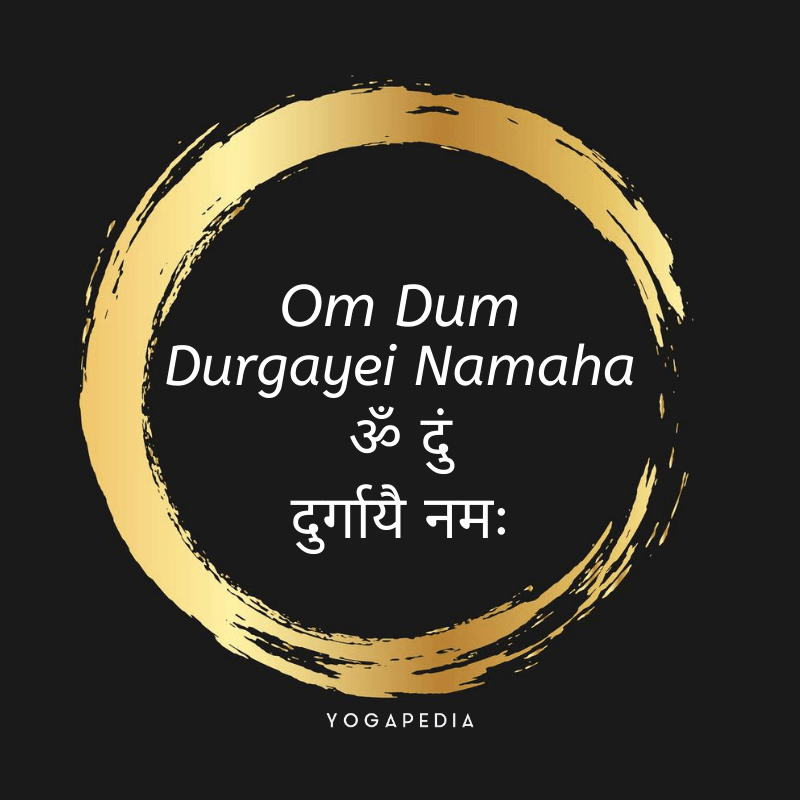 In general, mantras help to focus and still the mind in preparation for meditative states, but certain mantras such as Om Dum Durgayei Namaha are also used to enlist the help of a deity.

Otherwise known as the Divine Mother, Durga is symbolic of the destruction of evil. She protects devotees from danger and harm and combats forces that threaten peace and prosperity. Durga is a warrior goddess, depicted with remarkable beauty, unparalleled power and a formidable nature.

Durga is worshipped in as many as nine forms, collectively known as Nava Durga. She is most fervently worshipped during the Navaratri festival in India, in which each of the nine days of festivities is devoted to a different avatar of Durga.

There is no direct translation of this mantra, but each Sanskrit word has a specific spiritual or symbolic significance:

Om Dum Durgayei Namaha is believed to be a powerful mantra, offering protection and strength from the Divine Mother. It can be used to call upon the divine feminine energy of Shakti, to deter external threats and to destroy internal evil forces such as anger, jealousy and hatred.