I spent many years traveling the world and living in different countries in various phases of my life as a designer, a videographer, and a student of meditation and spirituality. I became fascinated with ancient ritual and cultural expressions of celebration – including food. In 1975, l met my meditation teacher and, for the next 30 years, I lived in Ashrams in the United States and in India. Ashrams are dedicated to the pursuit of yoga, union with your own highest divine Self, and everything is designed to support that journey - early morning mediation sessions, chanting sessions, courses in ancient texts and philosophy, opportunities to offer seva or service to support the community. And so too is the preparation of food that is served in an Ashram considered a practice. Your state of mind and your intention enters the food as you prepare it and is then absorbed as the food is eaten. If you repeat a mantra as you chop and cook, if you offer the food to a divine presence, if you serve the food with love – this will all support your wellbeing as a yogi.

I became a cook in the Ashram kitchens and at the meditation retreats that were offered around the world. I had been a self-taught gourmet cook prone to giving dinner parties in New York City where I had lived and worked. But Beef Wellington wasn’t on the menu at the Ashram and I had to learn a new vegetarian style rooted in the ancient art of Indian cooking. I also learned that my state of mind was just as important as my cooking skills. The kitchen was a disciplined place full of one-pointed mindful attention. Talking was at a minimum and everyone would silently repeat the mantra as the food was prepared. The result was some of the most delicious food I’ve ever eaten, filled with love and served to hundreds and sometimes, thousands of people.

When my husband and I moved to California, I took Ashram life with me incorporating the ancient teachings I had learned about living like a yogi - including the yoga of cooking. But instead of cooking for thousands, I was cooking for my small family and I had to get used to stirring my dishes with a wooden spoon rather than a canoe paddle [really!] in a vat big enough to hot tub in. At the beginning, I tended to make much too much food, but I’ve eventually learned to downsize and incorporate the same principals of ashram cooking into home cooking.

So why Blue Light Kitchen? Meditators through the ages tell us that consciousness, when seen in meditation, is a radiant blue color. And the name I received from my meditation teacher is Shyamala - a Sanskrit name which translates to “the blue light from the divine mother.”

And now it all comes together as I share favorite recipes from my adventure of cooking and eating as a yogi. All the recipes are designed to support you in your journey – whether you are a hatha yogi wanting to fuel your hatha yoga practice, or a meditator looking for food that enhances your meditation practice, or you just like delicious food that supports your well-being. Welcome to love-filled home cooking in my Blue Light Kitchen adventure! 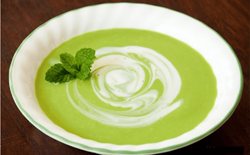 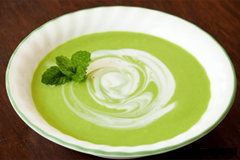 
Warm, nourishing and delicious, First Night Pea Soup is a great meal to help you find your happy place. Here's the recipe to give it a try!