A Tale of Unexpectedly Unplugging, Freaking Out and, Finally, Reconnecting With My Inner Wisdom

Takeaway: The magic of unplugging is real: try it out for yourself and reconnect with the joys of simply being.

I recently visited family in the high desert of New Mexico, which is a remote location found at the end of a treacherous dirt road accessible only by the most macho of four wheel drive vehicles. The ranch itself is a magical place, with a wide open vista onto the Sangre de Christo Mountains and promises of mountain lion sightings.

Though I was there to see family, I also had to get some work done and had been promised a newly installed high speed internet connection to do so. After 12 hours of driving from Austin to Santa Fe, my neurotic self began to emerge, needing to get online and start writing.

The pink adobe house was completely off the grid. The fact that there was now Wi-Fi was a miracle. The home itself was filled with years of collected art, exotic textiles and gorgeous paintings by the artist in residence. It was an inspired place, an homage to creativity and beauty.

Outside the silence is so vast you could hear the wind coming off distant ridgelines. There was no sound of electricity, no drone of an air conditioning unit turning on and off, no traffic noises. Just pure rare silence. A writer's paradise. A yogi’s solace. A creative's dream.

(Lost in Noise? Find Yourself in Silence and Reboot Your Connection With the World)

But I wasn’t there for the magic. Nor was I there under the premise of recharging. I wanted to write and check things off my content creation to-do list. Okay, so maybe I did want to relax, a little. Maybe cool off in the aluminum horse trough that was set up as a cold plunge when the temperatures exceeded 100 degrees in the baking afternoons. The first few days were great. I logged into my work, knocked out a few items and got my habitual Instagram fix. Then the Internet went down.

Collectively, my family spent more than three hours troubleshooting, trying to get the Wi-Fi back up, but it was useless. No one could figure out what had happened and, because we were so remote, the Internet provider — which was really a co-op of other frontier dwellers — could not assist us for several days. So, I did the only sensible thing I could think of. I called my husband who is the head digital marketing honcho of a software company based in Texas. After I explained the situation to him, he laughed. I could hear his grin all the way through the crackling phone line. “Well,” he said “what did you do out there before there was Internet?” As I searched for alternatives, my mind pulled a total blank.

I had completely forgotten. What was it I had done before Internet had come to the boondocks? Be? No, that couldn't have been it. That was crazy, who just is anymore these days? I had just meditated a few days ago, hadn’t I? Didn’t that count? The truth was I was disconnected and I felt as if one my legs had been amputated.

My mind paced back and forth, restless and unsettled. As I felt into my body, I could sense the tightness in my chest and belly and the tension in my shoulders. In that moment all I could think about was how I had to get online. Not being able to connect was unacceptable.

I was a long-time yogi, a meditator, a student of Sanskrit. Why was I pulling a blank? It’s not as if I didn’t know. On an intellectual level, I got that what I was feeling was aversion. I was out of practice in the art of simply "being" and I had fallen into the modern day rut of constantly "doing." Truly being in the present moment was uncomfortable because I had to slow down and address my feelings of discomfort and impatience. My inner monologue went something like this: "Great, now I won’t be able to log my freelance hours. People will think I’m a flake. I won’t be able to update my resumé. Can’t order that birthday gift for my daughter off Amazon. Won’t be able to check my Instagram feed." And so on. A tiny voice in the back of my mind suppressed a laugh. There was so much noise in my mind that I had muffled my inner wisdom.

(More on the seemingly uncomfortable practice of Exploring Aversion.)

But as the sun made it’s way across the cloudless sky and the Internet silence stretched, something started to happen. A subtle change — at first, almost imperceptible — began to slip in. My body began to naturally still itself. At first I wasn’t consciously aware of it, but my shoulders began to leave their perch around my ears and drop down my back. My mind became calmer and the whirlwind of thoughts, the vritti, slowed. I took a seat on the wide flagstone patio outside the house. I felt the stillness expanding and heard the hummingbirds dart through the air in search of nectar. I saw the brilliant clarity of the turquoise Southwest sky. The wind blew through the pinion trees and I marveled at the innate peacefulness of raw nature. In that moment I realized that it was going to be okay. I could tap into the ever present nurturing stillness beneath the surface of my mental noise. I was unplugged.

I remembered the words of a sadhu I had met in India who had asked me, “If everything is on the Internet, then what’s left in you?” I contemplated those words. What was left in me was what Buddhists call the luminous ground of being, or in yogic terms, Brahman. This ground is the pure, unadulterated experience of reality as it is. It is the being-ness that underlies all the mental chatter.

My inner wisdom smiled at me from its ground of being. It had never left. I had needed to break from technology and reconnect to nature’s own ever-present broadband service. Laughing at myself, I grabbed a towel and, with renewed surrender, headed for the cooling waters of the cold plunge.

(Read on in Accompany the Divine Play of Nature and Connect With Nurturing Mother Earth.) 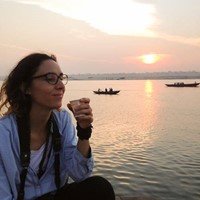 The Freedom in Letting Go
Yoga Wisdom: Warrior Tales Inspiring You On and Off Your Mat (Excerpt)
Dissolve the Ego With This Guided Meditation to Reveal the True You
The Wisdom of Non-Attachment and 3 Ways to Practice This Freeing Yogic Principle
How to See the Ego for What it Is
Yoga's Philosophy on Calming the Waves of the Mind (Vritti)